Keep up the good investigative work. I have been a fan since 2010 In Oklahoma - USA and now I am In Toronto - Canada. I am still a fan. Very impressive, in how your team is able to lay all the relevant facts.

Didn’t like that nbc/msnbc gave the prez a way out after pulling out of the second debate. But TRMS is like a pill that I must take five days a week to survive. Please keep up the great job Rachel.

It’s unclear to me how you and your team do a nightly deep dive into the news on a daily basis. So grateful. However the chips fall this fall, keep going. The country needs you and by “The Country”, I mean me 😉.

You are my favorite news person, ever. I appreciate your intelligence, your use of history to illustrate a point, and humility and humor. Whenever big news breaks, I always think, “I can’t wait to hear what Rachel has to say about this!”

Listeners aren’t fraidy cats. Super annoying hearing this fear mongering over and over.

Thank you Rachel for calling a lie a lie! Trump is a liar plain and simple. More media outlets need to call him out forcefully. I hate how some pussyfoot around. THANK YOU

I’m old. Retired. Covid and tRump fatigued and looking for people and advertisers to punish. Rewarding tRump was not meant to get us more information - it was pure money. Uninstalling all NBC affiliate apps, podcasts, and writing advertisers.

What I look forward to 5 mornings a week when I walk my dog. You are fantastic Rachel!!

I would rather hear about Joe, no more Trump; Trump is gaslighting us for free tv mentions as he did in 2016, his free media, he’d say crazy things, and all the media is repeating him.

The last four years have been a nightmare. Thanks for your level headedness and keen analysis. You’ve helped get a handle on all the craziness! I look forward to your take every show.

I have unsubscribed myself from all NBC/MSNBC podcasts due to NBC’s decision to live broadcast Donald Trumps’s Town Hall at the same time as Joe Biden’s previously announced ABC Town Hall. Yes, both candidates deserve equal time and consideration by the networks. But there is a context here that matters, Mr Trump pulled out of the original debate; Mr Biden then scheduled his Town Hall in lue of that debate. NBC’s decision to now host Mr Trump’s belatedly scheduled competing Town Hall is exasperating. It is a decision that favors entertainment over public education. CNN made this same mistake in 2016. I regret my decision to no longer engage the NBC family as I have much enjoyed and relied on M. Williams, Mme Maddow, Mme Wallace and the rest of NBC/MSNBC. Alas I feel obliged to vote, both by ballot and with my clicks and eyeballs. Quelle dommage!

Senator Gary Peters’ story really touched me. The death of our 18mo. old son was a traumatic experience for our family. It haunted us for years. I found myself rocking in my chairs and on the edge of my bed as if I were rocking him to sleep. I convinced myself that I had to have another baby if I were to keep my sanity. I finally became pregnant after months of efforts. Unfortunately, it was a tubal pregnancy that had to be aborted. I have never gotten over losing my son but thankful to have been able to save my life.

Just lost me as a listener, sorry Rachel the network lost all credibility by giving Trump a platform. It certainly impacts the sincerity of MSNBC programs. Edit then delete is what I’m tweeting

Not more than thank you- been a fan for years, enjoy listening to you as I walk my dogs every morning..... cheers 🇨🇦

Even though I have been a huge fan of The Rachel Maddow show for many years now, I am deleting her show from my feed. I cannot understand why NBC would broadcast his show, when Trump refused to have a virtual town hall during the pandemic after becoming infected himself. I am very disappointed in MSNBC at this time and deeply regret having to delete all MSNBC shows from my podcast feed.

Very informative and accurate! Keep up the good work Rachel! the world needs the truth.

What day is this??

Hello Racheal, I have a question is there anyway people could not bring guns to voting place to intimidate people. I’m disabled and though this would help the voting experience. Although I’m going to vote any way.

Love this man! So well spoken. He is a hero in my mind. Love your show.

Does she have any colored clothes besides black? Her closet must have a dozen black pants suits and nothing else. Is she transitioning to be a man? Something is very weird. 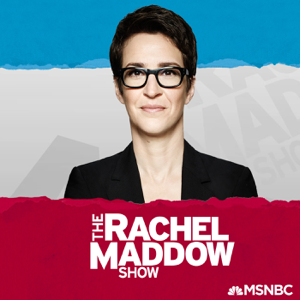 Rachel Maddow works with unmatched rigor and resolve to explain our complex world and deliver news in a way that's illuminating and dynamic, connecting the dots to make sense of complex issues. Join her every weeknight as she provides in-depth reporting to illuminate the current state of political affairs and reveals the importance of transparency and accountability from our leaders.

Rachel Maddow works with unmatched rigor and resolve to explain our complex world and deliver news in a way that's illuminating and dynamic, connecting the dots to make sense of complex issues. Join her every weeknight as she provides in-depth reporting to illuminate the current state of political affairs and reveals the importance of transparency and accountability from our leaders.