Much more representative of individuals within the culture. No caricatures , we’re normal sometimes boring but obsessed with our genre. We can’t dance, sing or have a smooth demeanour. Leave me be

Stop playing music in the beginning

Meth is the root of your problems

One of the few other pods I listen to every week!

Reviewed on Apple Podcasts
Plus Knight

I love hearing Joe and Gang talk they sh*%, but ICE 🧊 only criticism I have is about discouraging JOE from rapping!🔥🔥I need him back on his Slaughterhouse vibe. Tbh honest I love the podding but Joe on the Mic is serious! Folks need to put some respect on his pen🖊

This podcast is 🔥🔥🔥, Apple keep this one I’m a huge fan they keep it 💯

You play the absolute worse music in the middle of every conversation which makes the podcast quality not only so much worse, but it distracts from the seriousness of each topic or even the ability to stay interested in your conversation. You try to say this isn’t a music pod but 40 minutes of this show is the random playing of songs that are not only annoying but totally irrelevant. We want to hear your perspective on current events. Not how awful your taste in music is. Please correct this

The show is bad but when you’ve been watching for years you stuck.

I don’t like that y’all really don’t think that kids can’t be easily influenced to think a certain type of way.

Absolute Trash spewing from a mouth hole. A washed up talentless bafoon try’s to give takes on Rap And Other rappers when he has less talent than the Cash me outside how bout that girl…

Love the flow of the show just plugged in the year

I have been a fan of the Joe Budden Podcast since it’s Spotify days so much so that I started listening back in 2019 when the Iconic Rory and Mal were on it. The MOST annoying thing about the Pod has always been that When Joe wants to speak or make a point he CONSTANTLY cuts off His CoHosts while they’re speaking but when they do it to him He constantly cuts over them. Also, when Ice and Ish are having a conversation about something he will Interject his opinion WHILE they’re still talking then say “And we’re gonna move on from this topic” because HE doesn’t deem the conversation worthy to continue which is rude OR he will start to play music over them while they’re speaking. It’s unfair that as the Host he gets to basically “Son” anyone that makes a valid point or tries to talk about a topic that is passionate to them. I get that he has to maintain the flow of the pod but it often comes off as a NEED to be in charge of what is being spoken about and is hypocritical to the “Freedom of Artistic Expression” that he says he fights so hard for.

It’s called the Joe Budden podcast. I don’t expect his co host to speak as much because he’s the star. Ice and Ish give a 90’s big clothes sit on the stoop vibe. I never expect I think Ice to play any up to date music but it’s appreciated. Sparks and Joe is the only 2 I listen to when it comes to an opinion on music because 11 times out of 10 they’re correct.

I want Joe to let his co hosts TALK! 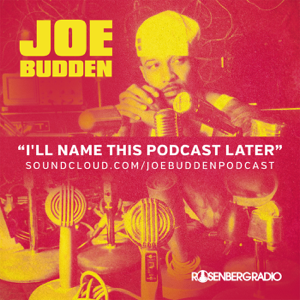 Tune into Joe Budden and his friends Rory & Mal and follow along the crazy adventures of these very random friends.

Tune into Joe Budden and his friends Rory & Mal and follow along the crazy adventures of these very random friends.