About What You Expect

It’s a NYT podcast, so it does suffer from a certain level of elitism and unabashed partisanship. They do provide solid reporting on some topics when they have less of an agenda (it’s amusing when the guest slips up and refers to a political party as “we”).

I doubt those reviews are read by the NYT. I’ve been following the Daily for several years now and today I have decided to unfollow because it has become so biased it’s painful to listen to.

Have loved this podcast for awhile BUT

I always really liked this podcast because it seemed to be pretty unbiased in reporting news, but some of the recent episodes have sooo obviously been biased so I’m slowly starting to turn elsewhere for my news. The Depp v. Heard episode was the most cringy in my opinion- they basically sided with amber heard even though the evidence was there that she was the abuser- only because of what this ruling will do to the me too movement. I agree this hurts the movement- but we shouldn’t side with the abuser simply for this reason! It makes no sense to me and as someone who watched the entire trial they did an absolute trash job at relying the facts in an unbiased way.

Reviewed on Apple Podcasts
(Mike) Board Games for One

That you, as a news entity cannot simply acknowledge that women can abuse men just as men abuse women in a case as open and public as Depp v Heard, has removed any trust I had in your journalism.

To echo other reviewers, I appreciate this podcast very much but sometimes stop listening because the host makes so many “mmm” and “mmm-hmm” noises that are irritating and distract from the content.

Concluding that the abused women are now scared of coming out when 98% of abused women KNOWS that Amber were lying. Abused women cannot jump from one man to another right away, they just can’t. But John Franco. Elon Musk. Etc. Real abused women are scared of recording anything but Amber recorded 99% of their fight and arguments. Family and friends will support a REAL ABUSED victim. Apart from Amber’s sister, who else were there to tell the world that she was indeed abused? The Daily is a joke

Quote from the notes of the most recent show.“Johnny Depp’s victory against his ex-wife Amber Heard in one of the highest profile defamation cases to go to trial could inspire others accused of abuse or misconduct to try their luck with juries” this was a extremely one sided episode. I was beside myself while listening to this one sided story. We know the bias is high with The NY Times, but this episode was so one sided! I have listened to this podcast for several years.

Depp vs Heard- disappointed in you NYT

**UNFOLLOWING** STOP trying to shove your narrative down our throats. We all watched the same trial and you continue to support Amber Heards lies 🤯. Your credibility is as good as the ACLU **A Dumpster Fire & Untrustworthy * There are REAL Domestic Violence survivors ashamed of Amber Heard blatantly lying to try and ride the coat coattails of the Me Too movement (committing perjury while on the stand with all the evidence brought forward) and you the media are giving her more publicity by publishing her falsehoods by stating “this set back the Me Too movement”. What sets back real women survivors are media outlets like you and ABUSIVE Lying Manipulative calculated Narcissistic women like Amber Heard. She is responsible for everything that is happening to her. The jury overwhelmingly agreed with what we the PEOPLE at home saw / listened too. Her PHOTOSHOPPED Pictures were FAKE, her GONE GIRL SA bottle story was FAKE and her fantasy stories were a Fake. She stole another SA story from her ex assistant and then lied again about him abusing her. Both parties were toxic and took drugs but the DV wasn’t from Depps side it was from Amber. Justice was served in this case and the REAL Victim was JOHNNY DEPP!!! Listeners go subscribe to Breaking Points with Krystal & Saagar for real credibility and non fear mongering news stories.

Just be glad you didn’t have long term Covid-19. I’m currently losing 5 points a month, over 50 pounds overall… You need a more well rounded podcast, to reflect us all. This sounds like a Noom advertisement, nothing more…

Reviewed on Apple Podcasts
Not so skinny myself

Always a good look at current events by people who are well versed in the selected topic.

One star off because Michael Barbaro can’t stop saying “Mmmm” every 30 seconds. Seriously, knock it off.

Show has really gone downhill. Haiti episode was an embarrassing attempt at journalism

Have listened to this pod since it started but I’m starting to reevaluate. Unimaginable since I grew up with the NYT in my hand every day. Graduated Mizzou journalism school because I was inspired by the NYT….. But the recent report on Haiti was so shockingly bad I couldn’t believe it……At no point was the question asked…. What level of blame do Haitians have to accept? “Why did the first Haitian leader accept such an awful deal?” “Why did he double down on that deal later on?” “Why did Haiti accept this when no other colony in the history of the world did? They already defeated France, do it again…… instead they agreed to an awful deal and then blame everyone but themselves…. If an American president agreed to such a deal the world wouldn’t say “oh poor America, let’s give them billions of dollars because they made a costly mistake” The president would get rightly criticized and voted out of office….. Also, the reporter blames the US and France for removing Aristide from power, but glosses over the fact that he was a human rights abuser and connected to drug trafficking…… then, she didn’t even quote the former French ambassador when she cited him for her reason for blaming France & the US!!! What did he actually say, give us a quote…. Get an interview with him….. We’re supposed to just “take your word?” What is this Fox News????Did you reach out to the US and French gov. For comment?? Sounds like you just took his word because it fit the narrative you were trying to sell….. I understand the issue of reparations is complex and serious, but this shoddy biased reporting only hurts the cause you’re trying to promote. Really feels like you guys knew this would get clicks so you just went with a lazy “easy” narrative even though the facts don’t back it up…..It’s the New York Times guys…. You need to do better

Love this show, including when Sabrina Tavernise hosts it.

I love when Sabrina Tavernise hosts the show. Her voice is pleasant and she always asks intriguing, probing questions. Of course I love Michael as well. The guests never get emotional, they just divulge us with the facts. This show is very informative and I recommend it to everyone.

This podcast is informative and comprehensive. It’s the main reason I subscribe to the NYT. Another reviewer criticized Sabrina Tarvernese. Personally, I think she’s great. Her tone is authentic and professional. I think she’s one of the best!

Just gives us the facts with normal speaking voices. I thought it was just the way the other host (Babaro?) spoke, but this new girl is just as annoying! And I feel like it’s a little biased. It tries not to be, but it comes through in the delivery.

I liken New York Times the Daily podcast to a daily dose of 60 Mnutes. Each episode is the equivalent of one feature report during a 60 minutes broadcast. The reports are in the 20 to 30 minute range. They include a dose of investigative reporting interviews with sources couched in the conceit of an interview with the actual investigative reporter. The reports are editorials. So you see people complaining about the podcast being bias and… Well… It is. Because it’s an editorial at its heart more than a simple news report. And that’s fine it is what it is. For my money the depth of the investigation, that is the thoroughness of it, is actually quite good. Yes it’s always going to skew liberal. It’s the New York Times. That does not make the reporting inaccurate but they are researching things and proving things from a certain point of you. If you pick up this podcast and want to get your daily news, you’re looking in the wrong place. They do have a brief 30 to 60 second section at the end of the podcast where they talk about what you need to know today, and it’s very weak. It probably doesn’t even belong in the podcast. If you want just news rather than a lot of editorializing or investigative reporting, I would suggest the Wall Street Journal What’s News Podcast. That has some investigative reporting but more interviewing content specialists based on daily news. Both podcasts have their place. The only bad thing about the New York Times in my opinion is the horrible imaging they use and the insistence on the same stupid mindnumbing cadence, which many commenters have complained about in the ratings and reviews feedback.

Perhaps we shouldn’t have sent tons of formula to Ukraine. Let’s take care of our own before giving to others. The $$$ needs to take care of our veterans, homeless, elderly, school lunch programs,etc.

This is one of my favorite podcasts. It takes a serious story from the news and does a deep dive. I can’t agree with other reviewers who say Bavaro is overly dramatic etc. I like his voice and tone, which are consistent with the seriousness of the story. 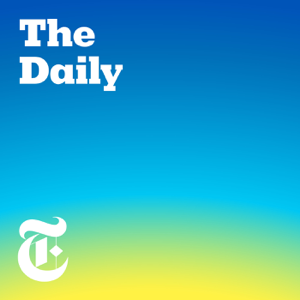 This is what the news should sound like. The biggest stories of our time, told by the best journalists in the world. Hosted by Michael Barbaro. Twenty minutes a day, five days a week, ready by 6 a.m.

This is what the news should sound like. The biggest stories of our time, told by the best journalists in the world. Hosted by Michael Barbaro. Twenty minutes a day, five days a week, ready by 6 a.m.