I really appreciate the Daily Wire’s stand for truth and justice and Liberty. Not sure how the US got so far away from these pillars our nation is built on, but I’m glad the Daily Wire is not simply going along for the ride but encouraging listeners to get back in the game and steer our nation back to the fundamentals of human life.

They should really get better audio equipment so his voice doing sound so high pitched and whiny :/ what a sad little man

If I could give zero stars, I would

But Can It Do This!?

Hello, I’m a member of the swisstian faith channel and brofist army. Have you heard about this Swedish chair? It’s now only 499. Unlike Ben’s bed, it can do this. (Leans back at full 180 degrees)

Taking a break from Ben

I am tapping out for awhile, need a break from Ben.

Reviewed on Apple Podcasts
John 2A

This guy is very good. LibTurds hate him.

I’m not one who is partial to either political party. I enjoy Ben because he’s honest and fact based.

This is comedy, right?

Be very careful with what your definition of marriage is. You say, man , woman and child. You make children the center of the marriage and alienate those who cannot have children saying that society only cares about marriage because of the prolific aspect of a man and a woman coming together and having offspring. Do you think many men and women marry knowing they can’t have children together? Remember when you married that you had no children. Therefore, children can’t have been the cornerstone of your union; you were joined without them. Your ineptitude of infertility is off putting. You even say that society doesn’t care about same sex marriage because it cannot result in offspring that continue the human race. I like your show a lot but you continually focus on child rearing as the center point of your union with a woman which is insensitive and disqualifies me from participating in the same union you claim to have; but we both made the same marriage pact. The truth is you were joined in union and then you were fortunate enough to have children. You’ve missed a big part of your own fortune by discounting that not all people can have children just because they get married. Yes, we still have a marriage and yes we are still families even if we can’t have children. And yes, my childless family still matters to society. But not according to this podcast.

Smart talk, but with a bias [Updated]

I have a lot of respect for Ben Shapiro, and I’ve been listening to his podcast for more than a year now. I value getting a plethora of opinions before making my own, and I can rely on Ben to give me a contemporary, conservative take on current events. With that said, it is clear that he has a base he needs to entertain, so some of his episodes are a bit more “red meat” than I prefer. He also does allow his individual beliefs to creep in on certain topics, which I don’t always appreciate when I desire more facts than thoughts. Overall, subscribing to Ben’s podcast can be worth your while if you’re looking for alternative angles to hot topics. [update] I did just get done listening to his 1,613 episode which covered same-sex marriage and the declining birth rate in the US. Unfortunately, I felt the need to dock a couple of stars. His own beliefs now dominate his narrative and doesn’t attempt to humor countering perspectives. Referencing the episode in question, he ties the decline in childbirth with the decline in marriage, and that marriage is no longer about commitment or family, but about love. That’s just not true, same-sex couples seek marriage to commit to each other as well as start a family. He fails to mention that most adoption agencies give preference to married partners, thus the need for marriage. If couples didn’t want children, they could just cohabitate which Ben cited as the new norm. Liekwise with child birth, his reasoning is that abortions and promiscuity are celebrated. He fails to cite the anthropologic science that lower infant mortality in western worlds leads to less children because couples aren’t anticipating a few of them dying along the way. He also fails to mention the glaringly obvious fact that children are immensely expensive which few couples can comfortably afford. The Ben Shapiro of old would have used facts and science to analyze these issues, but recently he’s become another conservative talking head, cherry picking science to support his claims.

That’s probably why Apple Play seems to consistently remove downloads of the Daily Wire podcasts. I’ve seen it for months for all of them, but most often for Ben Shapiro and Matt Walsh. Too much truth, I suppose, for Apple’s low standards.

I love that Ben knocks trump when he made his career off him. Well his famousness anyway. He mocks trump exactly the same way, he criticizes trump for doing the same thing. Ben…you’re smarter than this. You’re literally a baby trump yourself. I still love Ben and his show though. 10 stars. Please mock everyone in the mocking voice you use for anyone you think is less intelligent than you. You’re using the exact same tactical approach to popularity and sway factor as Trump. Lol but for real I do love this show and it’s very informative. I do see through you tho too.

Love your work and what you stand for. Thanks for continuing to share with the world. Keep it up and always have me waiting on the next episode.

This podcast got me into Daily Wire

Daily wire has become an amazing company. I love and support the content and endeavors they have started!

Sadly… Ben seriously missed the mark on the greatest crime against humanity and then double, triple and quadruples down - at some point - You will have to face what you did to your followers - Daniel Horowitz at Conservative Review has provided steadfast reporting on the damage mRNA has done - Ben, it’s hard to rely on your judgement now

I saw Ben Shapiro on YouTube put the smack down on a millennial about killing babies and abortion why it’s not OK. I wanted to check out Bens podcast. I have to agree with the previous review that Ben speaks too fast. This makes the listener have to use extra effort to pay closer attention to process his information very quickly. The listener becomes frustrated with this rapid fire delivery and will likely result in the listener turning off Bens podcast. I did. I can’t listen, either. Approach and delivery is everything.

How I get a balanced perspective

I’m a moderate Democrat who is interested in hearing all viewpoints so that I can form my own opinions. Ben is my go-to guy for understanding right wing opinions and perspectives. I started as an “every once in awhile” listener and have become a near-daily listener. I’m still a Democrat, but I have a lot more respect for and understanding of conservative viewpoints, and I credit Ben Shapiro for that.

Hilarious that Ben is shocked…

…that the “eXpErTz” lied to us about the vaccine. Are you kidding me?! NOW you’re finally realizing these vaccines are garbage?!? Would have been nice to listen to those of us who were screaming this from the rooftops over a year ago. There never *was* any evidence they prevented transmission…only the unsubstantiated claims of the corrupt vax companies and power hungry bureaucrats. And NOW you’re realizing there are actual real side effects possible? I vividly remember Ben repeatedly parroting the “safe and effective” talking point. Wow. Maybe this will be a wake up call for him. 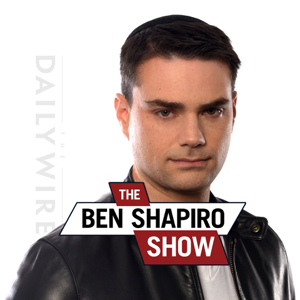