I’m really enjoying the newest season. The sound design definitely adds to the experience and griffin is my dm :)

This podcast has been such a pleasure to listen to, it’s by far one of my favorite DND podcast. The guys always give me a ton lol of laughs, and are amazing to listen to during long drives.

I have listened for a while and their current campaign is the best yet.

Incredible all the way around

Just wanted to show some love for graduation- even with a slow start, it’s become one of my favorite arcs.

Murder on the rockport limited

So I was listening to episode 4 of Murder on the rockport limited and I realized that the crab monster could have given them hard shell for takko’s taco mystery. Just something to consider.

Perfect to the end

It’s a really good podcast that i can’t stop listening to....... I have it on day and night you guys are very lucky because I usually never do that. I only have done it with 2 podcasts. It’s a very good show I like the end the most though. Un... it’s funny I love it. Actually all your episodes are funny. Oof this isn’t coming out on this review right.... just please make more podcasts like this! (There all effect to the end I hope) . (Very perfect) .

Better than all the rest.

The only D&D Podcast I could get into!

I have listened to several D&D podcasts over the years and could never get into any of them. The McElroys’ Adventure Zone has turned me around! I absolutely adore all of them and their natural story telling and roleplaying! It always feels like you’re sitting at the table with friends when you listen to their sessions! Thank you so much Griffin, Travis, Justin, and Clint for bringing so much joy to my sisters and I! 💜

Immersive and wonderful in every way

I’ve been with The Adventure Zone since Balance, but so far the sound design in Ethersea rips so hard. Music is stunning, the effects bring me straight into the action. Love the development and growth this show has undergone in a few short years.

I have enjoyed all the TAZ arcs, but Balance is incredibly special and I’ve listened to the whole thing many times. Now Ethersea is giving me that same amazing energy and momentum and making me fall in love with a whole new group of adventurers! If you’ve taken a break from TAZ I recommend checking out this new arc, and check out The Quiet Year prologue episodes to hear them building the world and culture, things from those episodes have repeatedly popped up in the arc so far!

Easily the funniest podcast ever. “Balance” was perfect, and wow “Ethersea” is developing nicely. Can’t wait for new episodes!! Great job, my dudes!!

I love everything about these boys and their good dad and I love DND.

The Balance arc was on of my favorite podcast episodes I have ever listened to and amnesty was good not great but I still enjoyed it immensely. Graduation, however I could not get through three episodes. I’m sorry Travis but Please go back to just playing a character and let Griffin tell the story.

gets better literally every campaign

creative, collaborative. feels like im chilling with you guys while you play. it's a great listen while im working or driving. picking up on inside jokes and running gags is delightful. griffin's music is chef's kiss also. i listen to it sometimes on youtube. i know this will sound like i'm simping but every time a new one starts i'm like "i'm excited to listen to the new stories they make even though the last one was my favorite." and then i get a new favorite. my favorite character in balance was taako. my favorite in amnesty was ned. my favorite in graduation was fitzroy. my favorite in ethersea so far is devo. and so far my favorite campaign was graduation. i loved travis's DM style. i know he was anxious about it but it was really fun. it's so weird that you guys have made careers of just being charming and funny dudes, right? do you ever get up and go to record mbmbam or something and go like, "this is a wild job i have." but im glad you're here. this podcast has really been getting me through the panorama. i even suggested it to my favorite work friend and now he loves it too. thank you for sharing the things you all make.

Cool show, I will say that the hour long episodes on the new season are feeling a little incomplete. It feels like nothing is really happening in each episode. It took a whole episode for them to fall into a clam hole, not that the exposition is bad but maybe if the episodes were a little longer they would feel more complete.

Stop after balance, save yourself some time

I LOVE this podcast!

⚠️⚠️⚠️⚠️spoiler alert!!!!!!⚠️⚠️⚠️⚠️⚠️I love this podcast, I have been listening to it for about a year or two. I am only a little confused about something, (from the first season) after relistening to it for the elevintyith time I realized, if Merle is from some far-off planet and they to this planet after like 100 others How do his cousins get there/find the planet that they were on? I dunno, like I was saying, I thuroughly enjoy this podcast/story. And much recommend it to everyone!

I have listened to the entire series a few times now, which is ridiculous, it’s so good, and the bonus content from subscribing to max fun is so worth it, not to mention they kinda deserve the cash. Each of these guys brings their whole heart and a lot of hard work to this podcast, and it is so exciting to have gone on the world building journey for Ethersea and now be in the world!Absolutely my favourite podcast ever!Are the TL:DR’s gone?Ok, this last episode was hard. Perhaps Travis could leave a little more space for the others to expand on their narratives rather than making every interaction about his characters personal journey. Sometimes in life you just ask someone to pass the butter, not because you were abandoned by the leaders of your faith or because you’ve decided to foster an orphan, but because you need butter. This hasn’t happened yet BUT if Devo becomes so mechanically “I’m really good at DND” overpowered that all of the stakes and tension are played out of the adventures then I worry. Also I’m hoping that since this one was so collaborative in the setup that the few instances of “you can do whatever you want as long as it’s exactly what I have planned for you” that became an annoyance in Balance will stop showing up. Obviously if the tres horny boys cheat code money and now you have to choke up the money flow to keep them from being too overpowered to be interesting I get it, but better to fix the loophole next time than punish the players for trying to play the game real good. Griffin and Travis bickering over whether or not Devo can sell a plate that Devo was given to sell for money… not fun. Returning the now sour grape flavoured plate to brother seldom… petty. The gaping silence of Justing and Clint awkwardly waiting for their chance to do anything or say anything or get a word in edgewise while the whole adventure becomes focused on a plate subplot… cringe agony. This last episode was the first time I ever had to stop listening and come back because I was frustrated. I love it, I love it all, it’s the only reason I took time to write this out. Keep up the good work!!!

Have to admit, I was late to the party, and TAZ is the kind of party you feel poorer for missing. I was one of the original wave of D&Ders and even made up a similar game that my kids and I loved to play together when they were younger. So when my daughter told me about TAZ, I picked up toward the end Amnesty and haven’t been able to stop listening since. Have listened to a number of podcasts, a number that have made me laugh but none that made me cry or tear up. So when I finished with the Balance arc and reflected on the fact that I had done the first innumerable times and done the second several times, I was hooked for good. Have to love good natured dynamics between father and sons, brothers and brothers. And the word palaces built by the creative minds of the then DM and the troika of players has continued to keep me drawn in. Now I anxiously await the drop of each new episode. FANTAZTIC!!! 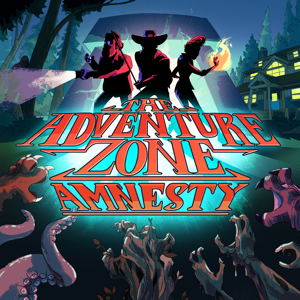 Justin, Travis and Griffin McElroy from My Brother, My Brother and Me have recruited their dad for a campaign of high adventure. Join The McElroys every other Thursday as they kill a nauseating number of gerblins in ... The Adventure Zone!

Justin, Travis and Griffin McElroy from My Brother, My Brother and Me have recruited their dad for a campaign of high adventure. Join The McElroys every other Thursday as they kill a nauseating number of gerblins in ... The Adventure Zone!