Give it a listen

The BEST true crime podcast!!❤️❤️❤️ I became a plus member for more episodes 🙈

Sword and Scale is such a great in depth podcast. So different to the other podcasts that just read from scripts and get their info off the internet. This is the best true crime podcast I’ve listened to so far.

The host is awful. Zero empathy for victims, no tact, disrespectful. Just terrible.

Not a fan since Recent changes

Recent changes showing me new releases episodes that aren’t plus and I still need a paid subscription, will no longer be listening as I can’t afford to pay to listen financially but always been a supporter until I can only listen to one in four episodes.

This show used to be amazing. Now he sounds like he is the bullied kid turned into the bully. So bitter, and opinionated to the point of inappropriate. The USA is far from perfect, but you insist on bashing Canada over and over. Canadians are a big part of your listenership. Not the best idea. Also making it subscription only while you make revenue from ads for the free podcasts is going to lose you a lot if listeners too. I guess we’ll all go elsewhere.

Sword and Scale is sooo Good but be warned it is also Heavy! I may have PTSD after listening to all of these! Stay Frosty!

Legend on the Mic - Mike

Incredible detail throughout the podcast draws you deeper into the scene at large. By far my favourite podcast and all because Mike knows how to set the scene 💪🏻

The top episodes of this show were all outsourced to other podcasters who deserve credit. (Like invisible choir) once he stopped outsourcing his quality and content went way down and just became a platform for him to troll and host internet fights. There have been real life victims of the hosts targeted attacks, including victims he’s exploited and doxxed on his show. Have anything other than praise for the show and be prepared for an onslaught of online harassment from the host, his fans, and his sock puppet accounts. Heck, half the time you can say something nice and he’ll still stalk you. He can’t cut it as a decent person so he leans into an alt right persona that he just can’t help but pump into his episodes, along with victim shaming, transphobia, homophobia, and sexism. If you need more of a reason to pass on the stink pile just google him or check out Reddit. Full of unending proof of his toxic behaviour he can’t keep separate from his show. One day he will be the subject of a TC podcast.

My favourite podcast of them. Every story is gripping can’t say enough how great it but Why are you putting plus episodes on here. Not a plus subscriber. Just noticed showing plus but can’t watch. Wish I could afford but can’t. Also notice if not a plus subscriber takes a long time for a regular podcast. Good thing lots of other great podcasts out there free

Some episodes are brilliant. But this man Mike clearly has massive resentment towards women, is a racist and a homophobe… I hope he finds some enlightenment

Been a listener since this podcast’s inception. Now that’s it’s become paid subscription only I’m leaving, it’s ridiculous to exclude all the people who can’t afford the extra couple of bucks per month. Also, ease up on us Canadians Mike!

Great podcast, in Canada and NOT offended!

I stopped listening to this show a few years ago when they had that female host take over for Mike and she was awful… I had no idea Mike had been reinstated until recently and it’s back to being great! The Canadian justice system is waaay too lenient on violent crime, Mike isn’t out of line for pointing that out. And I don’t know what people are taking about, Plus is an option so you can get more content, you still get the main shows.

The host is a narcissist. He can’t stop being an a-hole.

I’ve been a follower for years and while the stories are fascinating, the quality of the podcast and the bitterness of the host is unmistakeable and no longer bearable. He is rude, insensitive, and lacks the tact he used to have - shaming victims, stigmatising mental health, making sarcastic and uncalled for jabs at other podcasts, hosts, and listeners, amongst other infantile behaviours. If he’s criticised or held accountable for his actions, he says it’s all a joke or that ‘social justice warriors’ are out to ‘cancel’ him. Cancel culture isn’t real Mike, you’re just being held accountable for bad takes and an even worse attitude. It’s unfortunate that this podcast has declined in quality so much.

Used to be my fav

But now it seems you’re only releasing to subscriptions? Lately the narrator has become almost rude, no one wants to listen to that. Slamming Canada non stop just puts off your Canadian fans. Honestly if there was a 1/4 star, you’d get that. Your music too, AWFUL!! Do you even read your feedback?? *unsubscribe!!!!

My favourite podcast of them. Every story is gripping can’t say enough how great it but Why are you putting plus episodes on here. Not a plus subscriber. Just noticed showing plus but can’t watch. Wish I could afford but can’t.

I echo parts of the sentiment posted in the review that I’m referring to in the title. The Vince Li case, episode 31, was blatant fear mongering of schizophrenia. In particular, I really cringed at the last few sentences of the episode. Vince Li had paranoid schizophrenia, which only makes up a small percentage of the population with schizophrenia. I’m not just being PC - promoting this fear based message on this huge platform is part of the problem. But as an avid listener, I can hear some growth that’s occurred over the course of the seasons. To be discussing the effects of structural violence in relation to mental health is really interesting to listen to, and is important to spreading awareness about mental health

Used to be a great show

Quick…. Close your eyes… and picture that douche you went to high school with, whose job requires never putting on pants or leaving the house. Tada - Mike Boudet!

Gone to a paid subscription.

Not a bad show, but gone to a paid subscription. It makes an easy decision on what podcast to remove, I already have too many free shows to listen too. 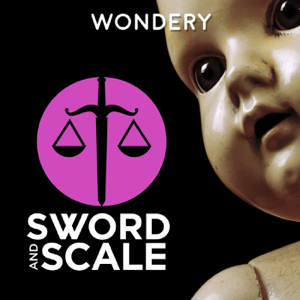 The Sword and Scale true-crime podcast is an immersive audio experience covering the dark side of humanity and human nature. Our stories delve into the worst of the worst and include murder, rape, dismemberment and cannibalism. No crime is too brutal and no victim is too pure. The worst monsters are real.

The Sword and Scale true-crime podcast is an immersive audio experience covering the dark side of humanity and human nature. Our stories delve into the worst of the worst and include murder, rape, dismemberment and cannibalism. No crime is too brutal and no victim is too pure. The worst monsters are real.