Jersey is not an Armpit

I only listen to Stay Tuned episodes and the Cafe Insider clips. Love the content! Recently, there have been a few episodes with additional Anne Milgram hosting, and it really frustrates me that a woman who has reached such positions of power goes to such lengths to qualify her questions. Not sure if it’s a lawyer thing but honestly sometimes I feel like her questions are longer than the guests’ responses. And on the clips of Cafe Insider that are released, this pattern continues with her questions to Preet. Have some faith in your listeners, we know this is “just your opinion” and “maybe you have a different view.”

Every time I listen to an episode, I think ‘this ones my favorite’ and wish to write a review. Preet’s voice, demeanor, questions, guests, topics covered—all well-done. Highly recommend this podcast to anyone and everyone who is interested In noteworthy topics and an informative hour.

Thank you, Preet, for the early episodes. But after you wrote your book, you and your CAFE-owning brother are promoting too many other podcaster wannabes like Lisa Monaco. Keep going high by avoiding the sale to sweatshirts and stuff. Have someone else voice the commercials, if possible . Don’t cheapen yourself as you await your next presidential appointment.Please make Insider with Anne Milgram available at no cost to non-lawyers like me. On the public version, you’re wasting time with silly jokes before cutting away to music.

The anchors of my information and perspective week is Stay Tuned With Preet. And of course Cafe Insider. The calm informed analysis gives me hope

I’m an appreciative Insider. A suggestion for a show...?

Please consider a show examining the possibility AFTER THE ELECTION of the George Washington Faculty Senate or the equivalent in the law school or the Ethics Committee of the American Bar Association or the equivalent wherever he holds a law license considering sanctions against Bill Barr.Just as Preet attempted to predict the first debate, if this I think necessary presentation of at least the underlying facts is done, that way he facts will be damning, or will be close but there will be no majority vote for sanction, and Barr and his enablers will follow Barr’s “no collusion” disreputable playbook.But oh to have the facts out there for the future historians!

I truly enjoyed listening to Preet’s podcast on 10/1 with Errol Louis! Laughed a lot, learned a lot and was sorry when it was over. Please Invite him again.

For a long time, maybe since Preet Bharara was on Pod Save America, I wished to listen to his podcast. Subscribed via Pocketcasts a few months ago, and am so happy I started listening from episode 1. He has a reassuring, calming voice; and I really enjoy listening to him interview his guests. I also greatly enjoy the recording of voicemails & Preets response. I highly recommend this podcast & hope it continues into 2021 & beyond.

Taking the Best, Leaving the Rest

It’s a difficult decision, but I guess it’s time to unsubscribe. I really like Stay Tuned, but there is too much other garbage clogging up this feed now. The worst was the interview with Rod Rosenstein, which full of deflections and evasion. His statement that there is no systemic racism in the Baltimore PD, backed up by statements that have nothing whatsoever to do with systemic racism was allowed to go unchallenged. He is too intelligent to get away with acting that ignorant.I do still find a lot of value in the Ask Preet segments and the Cafe Insider samples with Anne Milgram.

Cuts off. Interesting and worthwhile but paywalled

Warning — podcast cuts off at the most interesting and topical part. Probably worth subscribing if you are a lawyer, work in government, or in some way need to understand this material.It’s not particularly political or biased except that one party has decided to declare themselves in opposition to the constitution, the rule of law, science, unions, public health, and police reform. (Off topic, why SHOULD cops be required by their bosses (or allowed) to break down someone’s door in the middle of the night in a state where people are legally allowed to have guns and also normally allowed to shoot to kill to defend themselves? Is this not obviously a bad idea?)

I agree that a chefs life is much like Sisyphus', but on reflection so our all our lives. I would add the 'hook' is not that we do the same effort everyday but that some days the Stone is smaller, we can lift it, and other days we can throw it to the hill, and still others it is so heavy we need others to help us etc. variation and the drive for perfection, efficiency, creativeness etc make the climb attractive.

The podcast is quite well done and interesting and Preet does a fantastic job. The CAFE Insider business model does not work for me, especially when there are so many excellent podcasts available. I don’t mind listening to a few commercials but I do mind seeing a charge hitting my bank account every month

Informed and reasoned analysis of the news and legal topics. Helpful to me as an attorney, and accessible to anyone. Although Preet leans left, I love that he points out when there is a legitimate point by the other side. He really helps me to process everything that is going on.

Excellent analysis of current events and great interviews. I have learned so much about the legal system in America by listening to this podcast (and Cafe Insider)! Thank you!

One of the best…

I’ve listen to Stay Tuned for well over a year and it is a great current events/political analysis/great guests pod. So much so that I’ve become a paid member of Cafe. There are too many good episodes; I’ve gone back and listened from the first one on to the current episode. I look forward to it, I share them with family, re-listen to many. Give it a try and I don’t think you will be disappointed. For a little background on Preet - listen to his first episode in which he weaves a great narrative of how he was bumped from the Trump admin. He isn’t holding a grudge, understanding that the president has the authority to make changes, its just a great story with excellent insight to 45 and what we already understand about him. I look forward to each episode - and don’t get me started on Cafe Insider with the extraordinary Anne Milgram.

Keep up the good work! By far my favorite podcast!

Giving a platform to a sexual predator that blames her husband, life, past trauma, and a drug habit is repellent. And then when she calls her sexual behavior a relationship it slaps the face of true victims. The power dynamic is the issue not the gender of the abuser. Shame on you for legitimizing a sexual predator. Those in power know better than to prey on those in their employ.

Enough with the other Cafe podcasts

Usually a great podcast, but for months now the endless promotion of other podcasts has been too much. You could also cut it down to an hour.

Like Preet’s podcast but don’t like the push for other cafe shows. More separation would be helpful for subscribers.

I understand it’s hard to offer podcasts for free and shows need to find ways to earn money. Not sure when this became a short preview for an episode that’s paywalled but the episodes end abruptly now. 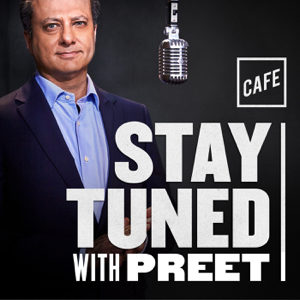 Join former U.S. Attorney Preet Bharara for a podcast about justice and fairness.

Join former U.S. Attorney Preet Bharara for a podcast about justice and fairness.