This is the first disappointing podcast from Wondery. Much ado about nothing.

Seems like a sexy spy story but it’s not. And the host is just awful (boring, naive), very hard to listen to her perform her “serious voice”. I can’t tell if she’s trying to sound contrived or if she thinks she’s important or what but it’s like listening to a hyper serious 3rd grader’s show & tell. The podcast is poorly done, don’t waste your time, there are plenty of better stories that are done far more interestingly by real professionals

I had no idea this would be a sympathetic take towards a Russian spy and full of debunked conspiracy theories. Wondrey, you are better than this.

heard the story before

Loved this format of a Doce/Podcast. Looking forward for more with this production style.

So interesting and well done

I was really hoping for an informative and insightful look at Russia’s activities in the United States. Instead, I got several hours of interviews with mostly unreliable and/or self-interested sources, often poorly contextualized. Furthermore, there really isn’t enough material here to justify the runtime. Spare yourself the delusional ramblings of Patrick Byrne and Butina’s innocent victim act by skipping this podcast and reading one of the many well sourced reports on the issues instead.

First Wondery podcast that makes me doubt their integrity. Listened to the whole thing because some content I’d not heard before. But to the narrator: Do you even hear yourself??? Unbelievably gullible takes. Maria, poor innocent just trying to do good. So misunderstood. I’ll be watching for the addendum that covers Maria gloating over Navalney’s condition as she visits his prison for Russia TV. Is that a coincidence too? Shame on Wondery.

For entertainment purposes only

I think this a great podcast. I am looking for imagination and out the box thinking not a historical documentary.

Wondery please choose better topics. I’m starting to think you’re working for an agenda. I couldn’t make it through this- TBH I’m more entertained by trash TV. It’s obvious there was a story that was wanting to be told here. And how the story goes seems to have been decided before anything else. It’s really just not that exciting when research comes second to bias.

She did okay until episode 5 or 6. Then she let her liberal bias show.

What a complete joke. I was going to call the host naive and stupid, but one of her guests (speaking of Butina’s sentencing statement) put it better, saying “I wasnt sure if it was incredibly naive or incredibly disingenuous”.Zero real investigative work was put in by the host. Please, I beg you to tell me what “forest” Butina was driven through from DC to Alexandria (episode 4). There isn’t one, unless they decided to take a 2-3 hour detour for fun. This was a 6 hour hit piece on Trump using a fired FBI agent, whose documented statement to his mistress “we’ll” stop Trump from being elected is well known, as a primary source. It took 5 episodes before Strzok’s clear bias and propensity to lie was brought up. Even then, it was written off as not interfering with his work (all evidence to the contrary).Wikipedia has more rigorous standards than this colossal joke of a podcast.

Jumps the shark in episode 5 or 6 this crap that is said (not even saying the podcasters agree with this) is not necessary to even be given life.

This is a really interesting and entertaining topic. However it feels incredibly one sided and sympathetic to the subject. Allows and engages with conspiracies and you would easily assume this was funded/supported by RT or other Russian ‘useful idiots’

Thank you for bringing this into the foreground for us. I knew nothing about the enigmatic Maria before this podcast. I appreciate you shedding light on an interesting and recent part of our complex history.

This podcast started out interesting and brought a lot of details to light I missed from the news. But it allowed a lot of conspiracy theories to be talked up and completely failed to approach the Russian side of things. Butina was accused of being a Russian spy and zero consideration was paid to Russia itself. The fact that the hosts were completely unaware of this angle was frighteningly apparent when they parroted Butina’s line to “trust no one and do your own research.” Something we think of from Q-Anon but is actually a long standing information tactic from the Russian government. The fact that the hosts took this completely at face value is insane. Finally, while it may have been recorded before, the story should have dealt with Butina's behavior back in Russia including her *insane* visit to harass Alexei Navalney in prison by yelling at him about how "great Russia's prisons are" and how he should be thankful he wasn't in a US one. This woman was allowed by the Russian authorities to harass a man they just tried to kill for propoganda purposes. Meanwhile, Wondery seems to think she's a really nice girl who's just misunderstood. If only we would "question more"

Great job talking a complex story and distilling it into a very entertaining format.

This was a somewhat entertaining podcast, but could have probably been presented in a 1 or 2 episode short series. Really not that much here, I get the picture about Patrick pretty quick for example, I don’t need 3 hours of him saying the same thing 100 different ways. All in all probably wouldn’t recommend, but was interesting to get a small glimpse into this area of American politics.

After listening to the entire podcast I got the distinct impression that the host was approaching the Butina supporters with a largely uncritical disposition. She spends a large amount of time humanizing the the conservative actors in this story (which is great) but skips past information that calls there narrative into question without much critical analysis and almost no push back. I don’t want to call this propaganda but it’s either that or incredible naivety. I’d give it a pass if I had the chance again. If you want to hear a podcast that offers a more balanced look at a controversial conservative person with real interviews check out The LineThat’s investigative journalism done right

She may not have been a spy, but she def was sent to the US for political purposes, on behalf of Russia! 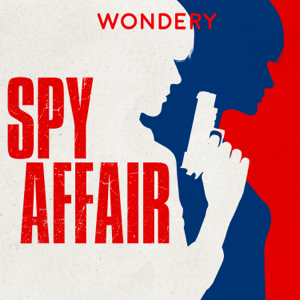 A charismatic Russian woman arrives in the US on a mission to improve relations between the two countries, and she soon makes some powerful friends. But who is Maria Butina? And who is she working for? As Maria gets closer to the rich and connected she also attracts the attention of the FBI. In the politically charged world of US-Russia relations, everyone has secrets and almost nothing is what it seems. From Wondery, the makers of The Shrink Next Door and Dr. Death comes SPY AFFAIR a story about deception, appearances and betrayal. Hosted by Celia Aniskovich.

A charismatic Russian woman arrives in the US on a mission to improve relations between the two countries, and she soon makes some powerful friends. But who is Maria Butina? And who is she working for? As Maria gets closer to the rich and connected she also attracts the attention of the FBI. In the politically charged world of US-Russia relations, everyone has secrets and almost nothing is what it seems. From Wondery, the makers of The Shrink Next Door and Dr. Death comes SPY AFFAIR a story about deception, appearances and betrayal. Hosted by Celia Aniskovich.