I started this at the same time I was watching the show Reacher, which takes place in a small, corrupt southern town. I was ready to be doubly dismayed by the small-minds in power, ruling with racism, misogyny, and xenophobia. I was confused but also delighted when I realized that this wasn’t so much a dive into shameless corruption by “God-fearing Christians,” but much more of a character study of one unique, bizarre, fascinating person, and the people involved in his life, and death. Brian Reed has such an amazing capacity to *not* show bias or judgement- his openness comes across in his words, tone, and apparently in his face and demeanor. People trusted a reporter from New York, and genuinely opened up to him. I’m finished it and I miss it already.

ALL of the episodes were riveting! What a strange, sad, idiosyncratic, funny and insightful character. But the Final Episode absolutely STUNNED me!! I reflected on this podcast for weeks, months afterwards. Americans are indeed a very unique lot.

There seems to be an issue with researching stories. Time and time again they portray opinions as fact.

The way this all came together, the narrator’s voice, the emotions and feelings I felt while listening….amazing!

So Impressed and Suprised

This is my first time listening to this. And I didn’t want it to end. But I’ll tell you, this was so well done! Great work!

I live in Birmingham,AL. So to hear this story of someone not too far away and listening to all the familiar places was very neat. I recommend everyone to listen to this.

Thank you, I cried.

Waow. Where do I start. Well written, amazingly produced. I broke down crying and I ran to twitter and google to look it up, hoping it were fiction, it wasn’t and I just sobbed! I recommend this to everyone out there. This is worth every single second. Poignant, stunning, and simply brilliant. THANK YOU!

This was a wonderful, captivating podcast. These characters came to life under the skillful professionalism of the host. John B. Tyler. Rita. Uncle Jimmy. So vivid. The podcast delved into the productive use of one’s time on this earth. I consider those 7 hours I listened to be time very well spent. Thank you.

Such a great podcast

This was the first podcast I had ever listened to. It’s sad that John B. never realized how much he touched peoples lives.

So well told….I wasn’t for sure after the first episode because it was just a lot of information but after the second I was hooked.

Listened much later than the world. Found it after having enjoyed Trojan Horse affair so much. I didn't know what to expect, the first episode was a bit dense -so much information coming in -but I loved it so much I finished within 3 days. I wept, hand to heart, laughed and a bit of shock too. The spiderweb of connections one individual life has and exploring the impact of one person on their lives was touching and also so sad. It was a beautifully told story, well explored and well respected.

Reviewed on Apple Podcasts
Kryssie B

I’ve listened to this story twice now. It’s so complex, interesting and slightly tragic. I love the storytelling.

Compelling Story with a Twist

After listening The Trojan Horse Affair I wanted to see what else Brian Reed has done and found this. For me the first episode was not easy to get through with John B rambling on, then by episode 2 I was eager to see how the story unraveled. I found myself very engaged with the people in the story, thinking about them and caring about them. I credit this to how Brian is with these people. The story was very alive with details and emotion, I was a bit sad to come to the end.

Loved this so much…. Will likely listen again

I could not stop listening. This was an amazing story. I’ve listened twice. Highly recommend!

This is such a compelling series. I am from the Deep South and was drawn in by the characters and their accents. I felt like I knew these people and this place. The story is so well told that I couldn’t stop listening. I will recommend this to all my podcast addicted friends. Well done! 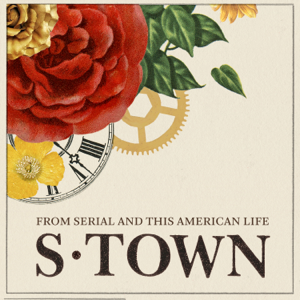 S-Town is a new podcast from Serial and This American Life, hosted by Brian Reed, about a man named John who despises his Alabama town and decides to do something about it. He asks Brian to investigate the son of a wealthy family who's allegedly been bragging that he got away with murder. But when someone else ends up dead, the search for the truth leads to a nasty feud, a hunt for hidden treasure, and an unearthing of the mysteries of one man's life.

S-Town is a new podcast from Serial and This American Life, hosted by Brian Reed, about a man named John who despises his Alabama town and decides to do something about it. He asks Brian to investigate the son of a wealthy family who's allegedly been bragging that he got away with murder. But when someone else ends up dead, the search for the truth leads to a nasty feud, a hunt for hidden treasure, and an unearthing of the mysteries of one man's life.