The New Rules segment is great, and his end of show rants usually are too (the one about Amazon was superbly on the mark). But the interviews at the beginning of the show seem to have become lame book tour stops. The recent interview of Bill Barr was particularly pathetic: No tough questions; no challenges to Barr’s lies. Just a chance for Barr to sell his book. I expect more from this show.

I used to be a fan. Not so much anymore. For the record, Bill: Progressives want healthcare for everyone, the Right Wing GOP and the dark money companies that support them want AUTOCRACY. NO equivalency here. Got it? Good!Ya might want to start supporting democracy NOT the Cult of personalities in their Coup Cult of Conspiracy theories and lies!Bye, Bill! Retire.

What an Autocratic sellout!

Bill Maher’s show is now a safe haven for right wing criminals like Bill Barr to reinvent their image. What a sellout Bill Maher is!!! You’d think he had never made a movie called “Religilous”! Barr thinks Christians are being persecuted?! How about all the children they RAPED, indigenous children they KILLED! Not to mention using the GOP as a front for imposing their Anti-Choice ideas on women, more MURDERS! Maher didn’t ask him about that or how Barr put his thumb on the scale at the DOJ to go after his enemies for his buddy Trump! No questions on that, BILL?!Bill Barr would STILL vote for Trump, news here Maher, because Barr doesn’t believe in democracy, you shill! News Flash! Barr would have gone along with Trump’s elections schemes if he thought he could get away with it! He knows the law and what Sedition is. He didn’t want to get in trouble, but he is a SEDITIONIST and CRIMINAL nevertheless!Have you no DECENCY Bill Maher Barr???

Bill is clearly a smart guy. He seems to be a much less extreme liberal than what the majority of the left is in america today, which is refreshing. As a conservative, it’s helpful to hear differing viewpoints in way that isn’t so hateful. I would give more stars if he could be a bit more objective in his approach to things.

Democracy is at risk

Bill, Your absolutely incorrect when you say this. The Biden admin has weaponized the DOJ/FBI to go after parents and pro life protestors. Let's add the whole defund the cops, release violent criminals and want to take away Guns from law biding citizen's. Biden is out there calling anyone who doesn't vote Dem a racist, racist etc. Remember it was a Bernie supporter w a AR who shot Scalise. Pelosis husband was beat by a drug addict who fly's the BLM / LBGQTIA flags. Can't make that up. The Dems have all the media except Fox, all the late night shows and social media who censors free speech. Add the whole radical trans movement and we'll, it's just too much. Hopefully tomorrow Democracy will work as it was designed and we'll vote out the real fascists. Goodbye Bill.

People need to stop complaining about late uploads and the quality of this podcast. If you want the show as it was intended to be played, pay for HBO. Also, don’t leave bad reviews because you don’t like Bill’s political views. I think you’re missing the point of the show if you think Bill cares about your one star review and partisan politics. If you don’t like it, don’t listen to it.

We can’t barely here our favorite show! Turn on the mics on the podcast!!! For crying out laud!!!

The episode upload schedule is terrible

I love this show. Bill often has an equal amount of guests with countering viewpoints which can lead to productive communication between ideological foes. I prefer Bill Maher over any other political talk show because of the ability of the guests to get scrappy but it’s always ends with respect. Great work to everyone involved, besides the podcast technician as of late. I understand this podcast is a free way to listen to the show for many and that’s a great move by the producers. However, these episodes have been uploaded days late or not even uploaded at all. The past two episodes are absent from the week of this review. I’m not able to use my TV HBO subscription with my work schedule, so I’m thankful to be able to listen to the episodes as they are relevant to the upload date. Keep up the good work, just fix the upload problem. Or don’t, It’s not my place to complain over a free product, but I’m a jerk so I did anyway.

perfect for the maga crowd .. thank you for being inclusive of the humor challenged members of our community. And no I won’t pay the bill for Netanyahu’s dry cleaning.

If you hate America that much, why not move to Venezuela?

If you hate America and Americans that much, why not move somewhere else? I’m a naturalized US citizen (after following the legal process for many years and paying taxes) - But I was born in Venezuela. I can easily hook you up with a Venezuelan passport. Heck, I’ll do it for free and you can move there before the end of the year. If interested, just give me a shout-out during your next show and I will write back with my phone number so we can start your paperwork.

Great Interviews- Unless the Interviewee is Bibi Netanyahu

The show is usually very funny & informative. Bill’s interview with Bibi Netanyahu made me doubt his integrity, as it was a joke (felt like a promo piece for Bibi, who is very smart, but sadly also a total crock etc). It made me question whether it’s worth listening to the show, if different people get treated differently. What’s the point?

I listened to three episodes. He shuts down or ignores every guest who doesn’t share his hate. Every one of his viewpoints is centered on his hate of Trump. He always circles back to this extreme bias. Tiresome. I was hoping for better.

Not up to the moment. Doesn’t recognize the danger this country is in and his constant both sides arguments are ludicrous. Time to retire Bill.

Bill needs to go research the difference between slavery in history based on class vs chattel slavery in the US based on race. His views are not only wrong but lean toward White supremacy and it’s sick. Goodbye.

Still like the show but don’t like the hate toward the LBGTQ+. Jokes are totally welcome about anyone, and I have been watching your show for some time, but your jokes about the LBGTQ seemingly are becoming more intended to hurt. It is like Bill wants to say he supports them but in reality he seems annoyed to even have to talk about them.

Bill wants to yell “get off my lawn“

Bill’s demonizing kids and their phones, Fat shaming, And criticisms without solutions grows tiresome. I used to truly enjoy the show, now I listen because the comedy is still good, but the political commentary is suffering. We are all dumber for Kellyanne Conway’s comments. She interrupts nobody gets to complete a sentence well she gets to, and she cannot get off the idiotic message. She’s not brave to come on the show, Bill made a mistake letting her come on his show and thereby dragging it down.

I agree that Trump should be indicted for 1/6 and Biden should for his kickbacks from Hunter CCP Inc. When will you have some Hunter crime information? Don’t be a blind dummy. 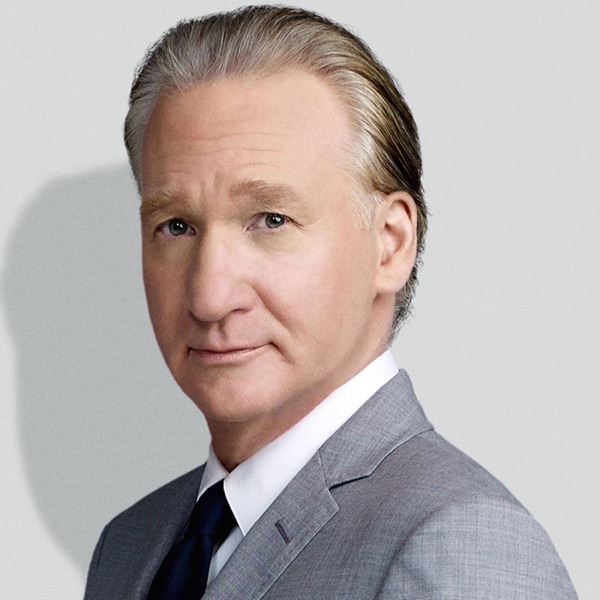