One of my favorite pods when I’m in the mood for political discussion. I always learn something new or interesting, and come away with a deeper understanding of the issues at hand. These guys have been on the inside and know how things work in DC.

Childish… and with interruptions of 5 minute blabbering commercials for their sponsors!

Lovett, that interview was terrible.

You want to talk Neanderthal. Look at these four. Third rate clowns who are first rate hypocrites. The real world isn’t a circus boys. It would be funny if it wasn’t so sad. Embarrassing. Sunlight is the best disinfectant. Cheers.

I’m ashamed that I was a fan of this

I discovered Pod Save America back around 2016/2017 when I was going through a bunch of personal issues. Back then, I was young and naïve and, even though I was a proud Bernie supporter, I still had faith in the mainstream Democratic Party. In the year since, I’ve become so frustrated and disillusioned with the establishment Dems—the ones these elitist white bros cater to. As an underpaid/underfunded performing artist crushed by student loan and medical debt without any generational wealth, I’m frustrated—I’m frustrated that I have to “hustle” and work 20 hours per day just to pay rent; that I still can’t afford to cover my loans and medical bills; that every doctor’s visit rips another whole in my thin wallet; that I can never have kids, since I can’t afford them; that I’ll never own a home, nor have enough time for a social life/relationship. These individuals not only epitomize privilege, but are happily mouthpieces for corporate Democrats who continually put their own interests above those of their constituents. They are perfect for those already in the MSNBC-bubble, where ideas go unchallenged, and the status quo is upheld—donors are left happy. I haven’t been able to listen to them lately, as I can’t tolerate it, but have they called out Biden about not forgiving student loan debt, nor raising the federal minimum wage to $15, nor introducing a public option, nor pass and infrastructure bill, etc.? Have they called out Kamala Harris on her hypocritical comments about the border and that awful interview with Lester Holt? Have they admitted that—based on policy—Biden the farthest thing from FDR... Or are they still just bashing Trump still? We can all agree the latter’s a narcissistic buffoon—let’s move on! Go listen to Krystal Ball and Saagar Enjeti on their new podcast, Breaking Points, or any of the other podcasts they work on if you’d like to jettison the corporate spin and endless pandering and softball questions. I donated my Pod Save America shirt (the one I got seeing Lovett or Leave It live years ago at Radio City Music Hall).

I am somewhat new listener, and I have quickly become a HUGE fan of PSA and Crooked Media in general. I LOVE IT! Thank you for providing incredibly informative content that is relevant, fun, funny, and digestible.

Becoming what you once claimed to hate.

Just listened to the last episode of this show that I will ever download. These hosts claim to dislike the Trumpian coarsening of dialog, the name calling, and pettiness. Yet, they gleefully refer to Marco Rubio as “Lil Marco” and reiterate Trump’s petty comments about his size as their own throughout the podcast. Rubio has terrible ideas and no moral bearings, but Trump and these lazy podcasters are obsessed with his size. This podcast has become the intellectual equatable of reading the comments under a real news article on Facebook = Waste of my time.

Could you drop saying ‘look’ at the beginning of almost every thought/sentence? It’s smarmy. It’s a junk word and only reinforces your attitude of superiority. Ugh.

💕Midnight Library. (Did Obama’s book as audio). I’m reading fiction as I need an escape from politics (when I’m not listening to podcasts, watching & reading news)

A witty intelligent group of guys but Lovett’s sexual innuendo with Secretary Pete was in poor taste. He should have taken the cue from Pete’s classy response and moved on but instead insisted on an acknowledgement. If you want to be treated like everybody else, then behave accordingly. I’ve listened to you interview numerous politicians on this pod and I don’t recall any heterosexuals targeting or being targeted with perverted jokes. Buttigieg is an excellent communicator and sounds like he’s blossoming into a great secretary of transport, but I turned off the pod off at that point.

Get over yourself, Lovett. 🙂

Total fan of PSA, but really, Lovett…. You were embarrassing in the interview with Buttigieg. Your “jokes” were street level and juvenile, beneath the Office he holds. Kudos to Pete for “not understanding the question” and therefore not responding. Step up your game. We are still in very serious times, levity is appreciated, but not in this particular interview.

This podcast is the best example of liberals just demeaning people with a different viewpoint. Calling people stupid and acting like they are smarter then everyone. It’s like Steven crowder but the other side. You should box Steven Crowder. Be better.

If you like this, please stay away from me thx

If you like receiving your information from white, male, privileged “try-hards” who twist themselves into knots trying to defend politicians who only care about the corporations that allowed them to become politicians, this hot garbage is for you. These losers think that just because they brought Obama lattes for 8 years, you should actually care about what they have to say about politics... which is mostly just full throated endorsements of an administration that DID ABSOLUTELY NOTHING FOR WORKING PEOPLE. The DNC is dead and anyone who is still carrying water for these monsters is beyond pathetic. It’s time for us all to grow up and embrace media that actually challenges power. This podcast is for lib babies who love reinforcing the right wing narrative that the left are all snowflakes. This is pure snowflake media; insipid, weak, and soulless.

I feel bad for the sons of this podcast’s hosts.

You guys keep me sane

Thank you for all the incredible podcasts and overall commitment to democracy. Been a follower since back 2017. Can’t wait to go see you guys live! -Argentine supporter living in florida

Where the hosts are interns applying for lobbyist positions 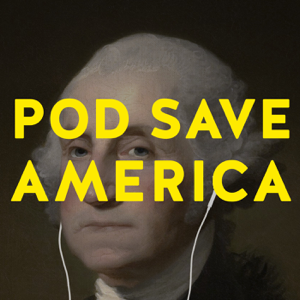 Four former aides to President Obama — Jon Favreau, Dan Pfeiffer, Jon Lovett, and Tommy Vietor — are joined by journalists, politicians, comedians, and activists for a freewheeling conversation about politics, the press and the challenges posed by the Trump presidency.

Four former aides to President Obama — Jon Favreau, Dan Pfeiffer, Jon Lovett, and Tommy Vietor — are joined by journalists, politicians, comedians, and activists for a freewheeling conversation about politics, the press and the challenges posed by the Trump presidency.