The new theme song has made my ears bleed twice. Make it go away please

the best podcast in town

been listening for over half a decade and its still my favourite thing in the whole dang world also i love the new theme! although i now have to stop my self from bopping to it in public so thats a struggle

One day I got home from work and told my girlfriend that Griffin said something so funny on the episode of Mbmbam that I was listening to on the train that I had to transcribe it on my phone. She said, "Was it "the Sauce Doctor's Blessing?'". I couldn't belive it becuase it wasn't even a recent episode, it was like a year and a half old. Anyway, we're married now. Thanks Griffin.

While I've been a fan of MBMBaM for a while now, they recently clinched it by calling “Buffalo Wild Wings (and Weck)” “BW3s”, which has forever alienated me from friends as I try to explain the nuance of the elusive “weck”. 3 Ws forever! Thanks Brothers! You’re hilarious and brilliant and a needed refuge in the dumpster fire of 2020 (and currently, kind of 2021).

I just gotta have these good good boys

I haven’t laughed this much in a loooooong time! Thank you for validating my sense of humor!

From Grandma’s lips to McElroy’s ears, a fun time was had by all!🪓🚬⚰️🦧

I heard some buzz about Griffin's paternity leave, and when I saw that Monday's episode wood feature only Travis and Justin, I, of course, felt some misgivings. However, they absolutely nailed it, as it soon became plane to me that that the two more seasoned brothers joining together without their greener sibling was the natural progression for their comedy. I'll admit, the expectation to listen to all three brothers has, at this point, become somewhat ingrained in my mind. I highly figured that splitting form the norm would leave me feeling rotten. But I decided to lumber on and stick with it, and as I heard the raspy tones of Travis' voice combine with Justin's polished phrasing, I realized that it really was the perfect time for this podcast to drop the advice, and add vice. Far from leaving me board, the boys have really spruced up the show, and I'll be pining for future episodes. While it's sad that the two elder brothers are splintering off from Mubbimbam, this episode is the perfect dovetail into a new era for Travis and Justin, shaking the (saw)dust from their feet as they leave Griffin in the scrap pile. If you can't sand the void left by Griffin's absence, just remember that he's with his children and wife, and shellac the support she needs from him if he varnishes on her crack jokes with his brothers. Griffin, if you're looking for a new podcast partner, I'm sure I could help spitball some ideas with you sometime. I'm pretty busy but we could probably set up a short meeting.

very good to listen to while im stuck on the toilet with bad bad poops. could be on my porcelain throne forever and as long as mbmbam is playing i wouldnt mind one bit

They can be pretty funny, I’ve even been to a live show because my boyfriend is a big fan. BUT I stopped listening for a while because its irritating listening to three of the most privileged “woke” white “cis” males telling me how to think, what to support, and who to vote for. Travis is the worst lol.

I don’t like when they go on political tangents. Sure, sometimes it’s relavent to what’s going on in the world (election, storming of the White House), but I don’t get why they have to slam politicians just for the sake of comedy. I doesn’t fit well with the time of the show and it’s not what I came to listen to. Great podcast! Lay off the politics.

Funny and raunchy without being problematic. A rare mix.

Love this show, love these guys

Can’t believe I’ve been listening to MBMBaM for a full decade now. Still one of my favorite podcasts, and I love the new theme song! Keep on doing your thing.

Fantastic episode. Please. Do more. Episodes. Like episode 555. Who knew. The powers of. Teak? Not me before this episode. Now. I do. Please. More.

Simply amazing. Listening to the brothers helps with all the bad feels out there. Very informative too! Munch squad tells me what not to eat, Haunted Doll Watch tells me what I shouldn’t buy. Without the brothers I would be eating Garfield pizzas next to a pile of dolls that want to kill me. Thanks brothers!

Great podcast with a terrible audience

One of the better podcasts out there - lots of great improv and bits. Most of the long-time fans of this show are extremely whiny and unbearable, though.

The show is nice but the Montaigne song is a bit off. Great song but odd for a podcast with a bunch of middle-aged dads.

And the whole mbmbam fam 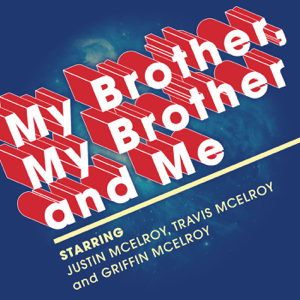 My Brother, My Brother And Me

Free advice, from three of the world's most qualified experts.

My Brother, My Brother And Me

Free advice, from three of the world's most qualified experts.