I loved Rayna and Ashley so much,they were so relatable and the advice was perfect! I do agree, there’s too many ads and you guys stopped being relatable, now it’s showy and you guys are kind of obnoxious. We get it, you have money now, you think you’re better than all the guys in NYC. Stop talking so much about yourselves and get back to being a dating podcast. There have been moments during these past months that I’m just like “cringe” they would have never said something like that before. I hope everything works out for y’all and you get back to how you once were. Adding to my review after the most recent episode 9/12. It was absolutely insufferable and sounded so incredibly Braggadocious. Do the girls even look at their reviews? I feel like if they actually cared about us and their podcast, they would read the reviews and make a change. The Quiet Quitting episode made me absolutely despise them and I own a roofing company, so I know how to run a business and how to take care of my employees. Get a grip ladies, you’re becoming unbearable to listen to.

My love is gone.

This used to be my absolute favorite podcast to listen to, but it’s turned into a game of what horrible thing will the hosts say or do next. Completely tone deaf to their listeners and their privilege. I’ve tried, quite a few times, to reignite the flame, but it’s long gone. Listen to a podcast where the hosts actually appreciate your viewership and don’t take it for granted.

Used to love it

I can’t do it anymore. They lack any self-reflection and think they are so much better than their listeners. Ashley bragging about her 3 DUI’s is absolutely repulsive.

I can’t stand the nonstop cackle

Don’t listen with headphones on.

Used to love them circa 2019/2020 now I feel kinda embarrassed when I listen? Hard to explain.

I went to the Boston live show on October 2021 and soon after that, I stopped listening. The show was not good, and I realized Rayna and Ashley have never provided given helpful dating advice. Well how could they when they're not dating? I've entered my 30s and the things they say are not relevant anymore. And we can all feel the tension between the two - Ashley, stop being so mean to Rayna and cutting guests ofd.

Drunk driving is not a joke

Saw Ashley’s interview so callously discussing multiple DUIs like it was a joke. So disgusting

Anyone else notice that the ratings and Rayna’s cup size dropped at exactly the same time?

I’ve listened to this show for ~2 years and noticed some rather sexist comments to professional male guests on the show that rubbed me the wrong way but, I am a strong believer that people should be allowed a chance to grow. I was honestly rooting for the hosts to have some recognition, given how vocal they are about sexist treatment of women but they never did. Both hosts follow the rather antiquated idea that treating men the way women have been treated is cool and miss the fact that, if it is unwanted and unappreciated from professional guests, it is harassment. It’s honestly cringe to listen to. The sex toy company they’ve started was really one of the last straws. Instead of lifting up the marginalized women and people of color in the sex toy and pleasure industry, they decided to put their name on products that have been around (maybe not in rose gold) for a while, effectively creating competition in the market and funneling profits away from the people that were already in the space into their own pockets. The concept of their app combines an ideas from a few previous sponsors. They could have made business decisions to include the companies and brands who have supported them but instead decided to become their competition. Unfortunately, the fame and financial gains from their original success of the podcast is now also clouding out their relatability. Their most recent episode is hard to listen to, as it’s tinged with the sense that they believe their success is from their hard work and hustle alone yet, as the previous paragraph mentions, they have chosen wealth over creating a truly innovative, inclusive, and sex-positive community. And for that reason, I’m out. You should just follow the podcasts of the professionals they interviewed instead; you’ll learn way more from them than you will their ill-prepared interviews.

Used to be my favorite podcast but now they have lost touch with their audience.

I used to love this podcast

This used to be such a funny and relatable podcast but as of recently Ashley and rayna have seemed out of touch. Instead of getting relatable dating content there’s so much out of touch content where they talk about how much their traveling, the fancy hotels they stay in and how the only good dating app is raya. I really didn’t like a recent episode with Jared fried where they just bashed on dating apps. Some of us are out here trying to find love and because of our lifestyle our best options are dating apps and it doesn’t feel good to go to what used to be your fave podcast to hear the hosts bash people who are trying.

Used to love this podcast but they are so out of touch now. Pushing 40 and acting like they’re 20, dishing out dating advice but can’t even get past a first date, and constantly talking about how much money they have while talking down on people with less without caring that they are smack talking their listeners. Also super gross that they continue to advertise for Daily Harvest which hurt people

Not what I was expecting

I really wanted to like this podcast, but it wasn’t until 42:36 that the hosts FINALLY introduce their guest and actually start talking about the topic of this episode. The first half was filled with nothing but nonsense and ads. After reading the other reviews, I definitely won’t be giving another episode a chance.

I used to love this podcast, but the ads make it hard to listen to

The reviews say it all. Used to be a Super fan, but now the podcast is so cringe. I used to love them but they are so far from reality and their inflated sense of self blinds them from seeing the decline of their fan base due to that fact that they have become insufferable. Ashley is a wannabe New Yorker/ “comedian” and Rayna who used to be down to earth has now become the yes- man of Ashley. The only positive thing about Ashley is that she can carry her giant head around, which is impressive considering it’s mass.

This podcast went from something I looked forward to every week to white noise chitchat to listen to while I fall asleep. 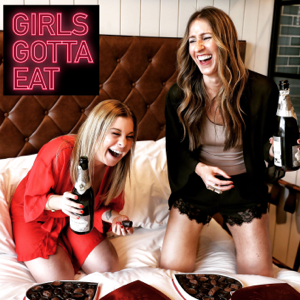 Why do guys just want to f*ck you once then stalk your Instagram forever? Should you ditch the apps and meet people in the wild? How do you get over a breakup when you feel like you're gonna die? These are all topics discussed on Girls Gotta Eat -- a hilarious podcast from Rayna Greenberg (@OneHungryJew) and Ashley Hesseltine (comedian + creator of @BrosBeingBasic).

Why do guys just want to f*ck you once then stalk your Instagram forever? Should you ditch the apps and meet people in the wild? How do you get over a breakup when you feel like you're gonna die? These are all topics discussed on Girls Gotta Eat -- a hilarious podcast from Rayna Greenberg (@OneHungryJew) and Ashley Hesseltine (comedian + creator of @BrosBeingBasic).