It all feels so forced now, rip. Great back catalogue

While I still like everyone on the show, most episodes have no rudder and feels more “fly on the wall” of loose conversations instead of a full show. Jan’s great, but a non-existent host, which causes endless cross-talk and non-sequeters. I can’t focus on what is being discussed for most episodes, so I just bail.

Could be great but way too long

I like this crew and their dynamic together, but there is no one on this earth I want to listen to for 2 and a half hours. With a show that long it’s inevitable you’re getting repetition, filler content, and generally wasted time. Give me a tight 30mins or 1hr and I’ll be back for sure.

It's not Giant Bomb anymore... something new though...

They can say it is all they want but it's not. The name GB wasn't what made the site special and the name is worthless now as far as its history and value. People loved GB for the people on it, the core people that each had 20-30 years of experience each were what made it special. There personalities blended so well together in a way that can only occur when lifetime friends get together. Even adding new people like they did after Ryan's passing worked b/c you still had core people involved that had those longtime friendships. New amazing interactions came from the new blood of 1-2 people being added to the group at a time but you still had the core, the foundation to keep it going. Covid did the most damage to GB as you lost the interaction being as good once hanging out over video chats instead of in a studio. So when CV hit, the Nextlander crew leaving and finally Jeff you lost what was GB. If you don't believe me go watch some of the old episodes pre 2019 and you see what was lost. Make me sad b/c it was special. When Jeff left I figured I'd be done but once announced Dan was coming back I knew I had to give it a shot. I like Jeff Grubb from his podcasts with "Mitch", still do and enjoy Voidburger a lot as well but it's just become another generic gaming site now like IGN, Gamespot where it's a constant revolving door of people. Dan isn't on the podcast enough so I only check out episodes if he's on usually and even then less and less. Once the Nextlander guys left I knew my days were numbered and from the forums seems many others are as well as I see so many cancellations of premium. Seems like most people only stuck around with Jeff just b/c of loyalty and hope but the site wasn't doing any better then either. Thankfully I can still support Jeff G and Nextlander through Patreon and get my fix their, from the judge of both of their Patreon numbers most of the old Premium membership from the last 5-10 years have as well. I had my premium account since the old Whiskey Media days and kept it till Jeff left, was some amazing memories, people and trips I've been involved with over time and it will be missed immensely! I wish for the new staff they could do something with the name GB out of respect for old and to show they're new and to help them as well Maybe like a Degrassi thing... GB the new Generation. I get why they can't though. I will still watch some of the shows online, read through the forums for the people I used to chat with till I figure out where everybody else went but I'm done with the podcast. The one thing I will say that I can't stand is how the podcast is a revolving cast every week, they could have 2 podcasts like before with a set cast of each so you can't get to know the personalities and enjoy the one you mesh with the most. Other than that, I don't want to get into nitpick stuff that I don't like about the podcast and what's being done with it. I just know it's not for me anymore.

Was a good podcast

Used to love this podcast then they shed all the good members and finally Jeff leaving (being fired) was the last straw. RIP to Giant Bomb it was alot of fun.

Still pretty good. Jess is insufferable but I throw no shade. All people aren’t for everyone and 1 out of 7 ain’t bad. Recommend.

All good things come to an end

4 minutes of ads before a super long musical intro… they actually start speaking at about 5min in. Jeff gone. Brad and Vinny gone for a while now. It was already hard enough losing Ryan. Now, I just don’t see what reason there is for this podcast to exist. Clean. CLEAN?! Why? I came for the personalities. They are now gone. Unsubbed.

Show used to be my favorite

10 years of my favorite show. This is not the same. Everyone scraping for time on air and repeating themselves. This show has become a clone of Kinda Funny content. Sad. Jan, stop pointing out segues. That is bad radio.

Gosh, this used to be a really great podcast

GB has had its time in the sun, but now its really just a shell of what it used to be.

No humor. They hate the games, gamers and game creators. I’m not into their political ideologies or the other nonsense. What’s the point of listening?My old review:The show is amazing. Funny. Smart. Intelligent. Best interviews. Jeff is the smartest & funniest man in games podcasting. Drew the kind tech genius. Brad the beautiful voice with a heart of stone. The rest of the crew is great. Dan creeps me out. He is the grown up version of the movie big, a 12 year old in an adult body. (He's disabled, so be nice) If you like adults with adult opinions that talk video games, this is it.

For Jan, Jess and Jason

Get out of here while you still can

Meaningless chatter with no talk of video games

The video version is even better! The conservative trolls review bombing don’t even really listen to this show.

The apple has rolled too far away from the tree. Back up, back up, tell me what ya gonna do now

The apple has rolled too far away from the tree. Back up, back up, tell me what ya gonna do now

Reviewed on Apple Podcasts
What's inside?

Remember when they spoke about games?

Couldn’t stop listening to the podcast because we wanted to see how long before they actually talk about games. Seems like it took over an hour. Feels like without Jeff this podcast has no one keeping the podcast moving. Just going to listen to nextlanders as it’s old school giant bomb

I have listened to Giant bomb for over 10 years and loved every minute. However Jeff has become a bitter old man and everyone else they have on spouts leftist garbage all podcast. His new podcast he started it with a 15 min diatribe on Covid and how he wears a mask and his kid cannot get vax’d… Good Lord will he ever learn? I listen to a gaming podcast to get away from the world and politics. It’s no wonder every GOOD personality left. So now the powers that be ring on recycled Gamespot backup hitters. Of course the start talking about being muslim and not being able to fly and how now there are two Women at giant bomb!! Who cares????!!!!Ryan would be rolling in his grave if he knew what had happened to his beloved site! RIP giant bomb it was a good run!! I’m off to listen to Nextlander!

the back catalogue of this podcast is amazing

This is not Giant Bomb

It is now just a collection of posers and idiots who don’t know what they are talking about. 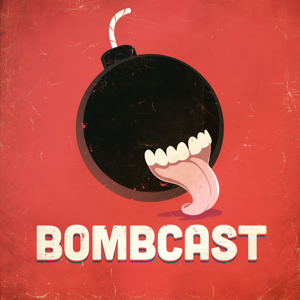