Dax and Monica---I hope you'll consider interviewing Ryan Holiday of the Daily Stoic podcast. I KNOW you will love his message and style...and he's as hot as you are for the same reason!! We can all use the wisdom of the stoics at this moment in our country. Maureen (36 yr long friend of Bill 😁)

Until Harry, I have had much respect…

I gain so much from these interviews and the intelligence and wisdom of the majority of your guests. The educated and the ones who have done much work to heal and come from a place of having learned well. I learn so very much, and have been healed in ways I didn’t realize I needed healing. I absolutely thank you for this podcast. But Harry. What is he an expert on exactly? He and Megan are both still coming from places of pain and anger, which obviously shows they have not done the work. They are dangerously spreading mental health awareness “wisdom”, when what they say is not what unwell people should be looking to emulate. To hear them speak of their negative experiences yet not much on how they’ve personally healed. They say the “right” things while not really saying anything of true value. Sounds like they healed by running away and leaving their families and jobs, thinking they can leave their issues behind - when the issues are in their own way of thinking. They could stand to listen to allllll of your podcasts.“I first went to therapy because of Megan” - sounds incredibly dishonest - as he’s spoken of going before years ago at his family’s suggestion. No one wants to hear “advice”. It’s hard to look to him and Megan as mental health role models when they go on television just to “speak their truth”….publicly hurting his father, his sister-in-law, his brother, and even though he says he had no issues with his grandmother or grandfather, how blind is he to think that what they says wouldn’t hurt them as well. While his grandpa is close to death and his granny is grieving. Pretty shameful. Not a healthy couple. Please, I beg you, do not have Megan on. Don’t let these types of people on, just because they’re the hot topic. It’s dangerous. Yes of course EVERYONE has problems, but some make problems and some have it fit their own agenda and some are not healed enough to give advice. To complain about finding his own security, having to stay at a mansion, only making it because his mom left him millions of dollars. During a PANDEMIC no less, with million of people around the WHOLE world dying, poor, hungry, homeless. Wow. This is dangerous bc there are those out there who feel for them, and it could be feuling the sense of entitlement so many misguided people feel these days. They are owed. Owed respect. Owed fairness. Instead of working on their own mindset. Something tells me their “problems” will keep happening “to” them. If Harry is in therapy, he needs to quit that person and find another one.

I found this Podcast via recommendation of my parents. As a High School Student who is very interested in social concepts and psychology, one of the episodes that sparked my interest was “Armchaired & Dangerous: Simulation Theory”. The idea that Earth and the rest of the universe may be fabricated or artificial is an extremely unique idea that I had never truly understood. I thoroughly enjoyed the interesting perspectives that the hosts brought comparing the simulation theory to religion and beliefs of the bible. The recordings brought by David Ferrier bring enjoyable new perspectives to the podcast as well . I also enjoyed the episode with the interview of Rupert Grint. I enjoyed the new perspectives that Grint brought about the film and movie industry. His unique experience while growing up on a movie set is unlike anyone others. I’ve only Just begun listening to this podcast, but I think that it is definitely something that I will continue to enjoy. There is such a wide variety of topics that Monica and Dax cover in their “Armchair Umbrella”, that there is an episode or series that everyone can enjoy! I personally love the Armchaired and Dangerous Series! If you are into social concepts and conspiracies, this is definitely a series for you. But if you are more into learning about smart people with a unique point of view, I recommend the Experts on Expert Series. Whatever it is that floats your boat, Monica and Dax have it covered. I love the versatility and uniqueness of each episode and series. Armchair Expert is a podcast like no other! The interview questions and discussions are unique and thought provoking which helps to effectively engage the listeners or “armchairries”. Overall, I love this podcast and recommend you give it a good listen!

Prince Harry was open, honest and very interesting and trying to talk about mental issues and Dak didn’t even educate himself on anything other than pathetic issues from gossip rags. Every idiot older than 15 knows he was a helicopter pilot on one of the greatest helicopters ever made. So embarrassing that he had no idea I’m afraid I was more frustrated listening to this show because poor Harry kept trying to talking about what he came to discuss , mental health. So I came here to hear Harry and after seeing what this is really about , Dak is too lax to take time to research the subject the guest is th ere to promote

I am continually blown away by this podcast & cannot recommend enough. The guests are all so intelligent & interesting. Dax & Monica are outstanding hosts who put a lot of research & thought into each interview. This show has opened my mind to new ideas & expands my empathy for mankind

Stopped listening due to language

I started listening to these podcasts because the guests looked so interesting, but I had to stop because every other word is the F word, and there’s other bad language just make it too unpleasant to listen to. Not for my demographic.

I LOVE THIS SHOW. I started listening avidly when lock down started as something to pass the time and have become a full fledged arm chair-y! (I was able to listen to a lot of older pods due to my work conditions)Please try and get Jane Elliot on. That would be an amazing listen. I love you both Monica and Dax!

Let’s post these podcasts on multiple platforms so we can double dip our ad revenue. Yay!

Found Armchair Expert with Dax through Women in Crime

Dax is a breath of fresh air

I love everything about his style, from the banter to to more serious exchanges he has with his guests. Don’t change a thing Dax. Just a request: Interview Saifedean Ammous on Bitcoin. It’ll be a scintillating episode. I guarantee you that much.

Hey BIGOTS, no need to FLOUNCE

The amount of reviewers who stop by just to say they don’t like the “woke” tone or criticism of police is hilarious. Y’all aren’t his people. You never were. Stuck around and learn something, or don’t, but this isn’t an an airport, NO NEED TO ANNOUNCE YOUR DEPARTURE 😂#DefundThePolice #BlackLivesMatter #LoveIsLove #BlueWave

The profanity used is unnecessary. Let me know when the language is clean. I’d love to start listening again.

Reviewed on Apple Podcasts
critic of 2

Keep politics out of it...

For the most part I have enjoyed this podcast, and I enjoy that Dax tries to keep things apolitical and has interesting guests and a fabulous interviewing style. Unfortunately, his sidekick Monica clearly needs everyone to know how “woke” she is and really goes off the charts sometimes and really turns me off. I listen for the information and the interesting guests, not for her political commentary. I am listening much less than I used to because of her.

Loved this interview but where’s the fact check! Was hoping you would do the test! I am Singaporean; husband and kids are American; have lived in China, Singapore, Hong Kong , Macau and USA, so listening about the cultural differences helped me to understand my experiences!

Love this show and everything they do!

This podcast is a vacation, a challenge, an entertainment and a comfort for my soul. I love it so much.

It’s the highlight of my car drive and walks! Thank you for keeping my brain fresh! 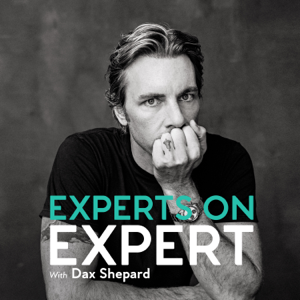 Experts on Expert with Dax Shepard

Hi, Dax Shepard here. I’m fascinated by smart people with a unique point of view. On this show, I leverage people’s vague awareness of me as an actor to talk with a bunch of bona fide experts. It’s a soothing mix of brain candy and defensive humor (my response to feeling intellectually outclassed). Join me on a layman’s journey through the Land of Specialists!

Experts on Expert with Dax Shepard

Hi, Dax Shepard here. I’m fascinated by smart people with a unique point of view. On this show, I leverage people’s vague awareness of me as an actor to talk with a bunch of bona fide experts. It’s a soothing mix of brain candy and defensive humor (my response to feeling intellectually outclassed). Join me on a layman’s journey through the Land of Specialists!