But I do not understand the purpose of the secondary host. I assume it’s all scripted, but her role seems to be to throw in unnecessary commentary and remarks that, imo, just interrupt the flow of the storytelling. How about they take turns telling the story? But this way, her inclusion is just annoying and superficial.

This was amazing! I love Dolly so much! 🫶🏼

These girls make my day!

I love their personality, and well thought out stories!

I like the show and the story telling. However, the F*** bombs are annoying and feel unnatural, not even well placed. There are so many more adjectives that could be used.

Perfect example of how their generation *thinks* they know everything…

…but in reality they don’t bother to do the work. In this case, the creators have essentially cobbled together the most obvious and well-worn tidbits from clickbait pop-culture websites and gossip rags….and they indirectly attempt to justify this shoddy and lazy “research” by calling it ‘comedy.’ Joan Rivers is rolling over in her 24-karat gold coffin. (She was cremated, actually.) And they attempt to signal it’s comedy by telling their little stories in the style of pre-teen girls in a school bathroom conference gossiping about boys and bad hairdos. (“OMG!”) The most egregious of the episodes….and, in fact, why I had to post a review… is the disgraceful hatchet job they do on the three episodes about Dolly Parton. They recount only the most obvious stories (the woman she saw as a girl who inspired Jolene, etc.) but with an incredulous attitude that traffics in one horrible stereotype of people from Appalachia after another. They repeatedly emphasize Parton’s poverty so many times that it becomes highly amateur poverty porn even worse than Hillbilly Elegy (and there’s not much worse than that!)…which is ironic given how much the authors fall over themselves blaring their “progressive” political bonafides. So much so, In fact, that their thousands of reviews are “liberally” (ha!) peppered with hilarious exhortations from Trumpsters and fans of Vance. They should have known better than to throw together this 3rd grade book report on the life of one of the most beloved and talented and giving people on the planet…with absolutely not understanding or respect for where she came from and how she became the icon that she is. But realizing that would have required a level of self-awareness that extends beyond the ego…. or to paraphrase Mary Poppins they’d need to look beyond the end of their own noses…and, well, their world view and that of many—if not most—of their contemporaries leaves no room for possibility that someone who’s been around the sun a few more times might actually have acquired some useful knowledge they weren’t born with or acquired yet. I suggest that rather continuing to pursue their “careers” in comedy they should instead take advantage of their youth and pursue accounting or some other endeavor that requires as little creativity…and writing skills…and performing skills…as possible.

I love that sweet gossy girl!!!

Entertaining, but enough of the swearing

I do enjoy this as a break from my other podcasts, but I wish they didn’t swear so much, it’s not needed. Comes across as trying to cool, you can be entertaining without being vulgar.

Love this podcast! I look forward to each new episode every week!

This podcast just summarizes already public facts and tries to make it sound interesting. There is nothing unique or interesting about it. Dolly Parton’s America is the only podcast that provides any real insight into Dolly Parton’s life.

Unsubscribed on the spot

When they said Marilyn only admired Lincoln and Einstein because they were “white men chic”. I’m Asian but even I know they were one of the greatest politicians and scientists but these hosts reduced them to some racial epithets. They should be ashamed!

Could you guys please do the Olsen twins? I know no one really knows much about them.

Whatever you think about his views, no one should be assaulted while doing their job.

Great, but too much swearing

Like another reviewer, I really enjoy the stories, and they do a really great job, but there is way too much swearing… it would be so much more pleasant to listen to without the f-word.

Listening to one the Marilyn Monroe episodes, I just about lost it when one of them called Pruning Shears.. Shearing Prunes! 😂 and to think no one corrected it! 😂🤣

When you’re not as wealthy as the Rockefellers or the Carters? The Carters?

Reviewed on Apple Podcasts
Bridget In The Bardo

I Miss the Old You.

I love this show. Been a must-listen for me for a long time… and I even find the recent seasons *pretty* good. But something is missing, right? The writing doesn’t seem as good, the hosts seem a little bored, the stories are a little more obvious (I mean, Dolly Parton’s America was a huge hit not that long ago), and I just feel like we’re not getting the wide array of storytelling we used to. Kardashians? Again?! I miss the days of the Murdochs and Gettys… Maybe it’s just me.

Not even a country fan, but this Dolly series is already AMAZING just two episodes in - looove!!!

This podcast about Dolly really should be a 5 star …. The 2 ladies did a great job talking about Dolly Parton’s life BUT One of the ladies would always insert the “F” word throughout the story. The girls have elegant voices and are funny and cute. They have what it takes to crank out very interesting podcasts without having to insert that word. Maybe they’ll just slice out that word and wow … then they’ll have one very awesome show !!! Then I’ll bump them up to a 5 star rating.

Loved this podcast, I really like the insert of Dolly singing at age 9.

Why would someone so world wise b foolish enough to try to “re kindle” an illicit affair w a married president via a live public performance. I’m sorry for whoever got fed this cringey projection. Ppl don’t get to her level by being so juvenile and if it was secretly her plan she would have kept it a secret cuz it’s not much of a plan. 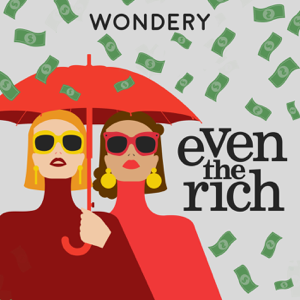 Our lives can be crazy, but you can take a break from it all with Wondery’s new series, Even the Rich, where co-hosts Brooke Siffrinn and Aricia Skidmore-Williams pull back the curtain and chat about someone else’s craziness for a change. They tell stories about some of the greatest family dynasties in history, from the Murdochs to the Royals to the Carters (Jay-Z and Beyoncé, that is). Because as Queen Elizabeth once said, “A good gossip is a wonderful tonic.”

Our lives can be crazy, but you can take a break from it all with Wondery’s new series, Even the Rich, where co-hosts Brooke Siffrinn and Aricia Skidmore-Williams pull back the curtain and chat about someone else’s craziness for a change. They tell stories about some of the greatest family dynasties in history, from the Murdochs to the Royals to the Carters (Jay-Z and Beyoncé, that is). Because as Queen Elizabeth once said, “A good gossip is a wonderful tonic.”