This is the best pod. And we all believe in you Brit and you got this

Reviewed on Apple Podcasts
BC2024

I’m a big fan of the show and have listened to every episode. Now that they produce so many different podcasts, I definitely notice the quality of research and commentary has slipped. I believe this is their namesake show and I hope they re prioritize it more. The vibe is also a lot more preachy activist than narrating a true crime and just telling us the story without injecting lectures all the time. Also, the number of ads and the timing of those ads seems disrespectful to the victims whose stories they’re telling. Do better please

Be weird. Be rude. Stay alive!

The best podcast! I love the way all the details are always presented and it’s always to be the voice for the victims ❤️

Just found you ladies over the weekend. I’m addicted. Had never listened to podcasts but got tired of Netflix etc. Started with your first one and working my way to current.

Ashley Flowers is the worst

I wanted to like this show I really did. But Ashley Flowers made it BLATANTLY obvious they were stealing slogans from other true crime podcasts that shall remain nameless. How have they not gotten sued? “Be rude and stay alive”…didn’t hear that YEARS before. And poor Brit. Ashley treats her so poorly and whenever the girl gives her opinion there’s a long pause and Ashley responds “…….riiiiiiiiiight……” like everything Brit just said was the stupidest thing she’s ever heard. I gave this show a legitimate attempt but Ashley became too much. I honestly just feel bad for Brit and the way Ashley treats her.

Most amazing podcast ever!Ashley and Brit are the perfect combo, and they always give every episode their all. Would 100% recommend!

What happened to Brit? I missed whatever terrible sounding thing is going on and I’m worried.

I used to love Crime Junkie, but it has gotten too political. Each episode has some sort of woke ideology and they have become very anti-police. They are great story tellers, but wish they would leave the politics out of it.

Best of the best

These ladies cover crimes I’ve never heard of, try to find missing people, highlight cases that were poorly handled; they do impeccable research and the storytelling is great!

This is a great show with great reporting but there are SO MANY ADS. I get it’s a free show but jeez do we really have to listen to 5-6 ads in a show that’s less than an hour?

I hate to write this review. I’ve been a long time listener of crime junkie, it is what got me interested in true crime and it was the highlight of my week. I think that both Ashley and Britt are excellent story tellers, and I have no issue with their banter or Britt’s commentary like some other reviewers here. My issue is the choice in the recent cases. They seem more and more like the cases in the deck, where they are unsolved. They also seem to be pushing a certain agenda of trying to highlight the cases of those that don’t have a ‘voice’ or are ‘silenced’ instead of focusing on the quality of the content and just unfortunately, a case that is interesting. If your an avid listener, you can certainly see the difference in cases covered in the past versus this recent influx.

I used to absolutely adore this podcast but nowadays it just doesn’t flow like it’s so woke trying to humanize a rapist and killer by saying “we should use their PRONOUNS!” like he/she/whatever that monster was is a piece of trash he raped and killed an innocent woman for goodness sakes! Honestly it feels like Britt is no more than a prop for the “oohs and ahhhs” I mean at least they put her picture back on the apple podcast site and she rarely speaks. Also I heard that Ashley harassed a woman on instagram for not giving a glowing review of this dumpster fire podcast. I would give a zero if I could.

USED TO LOVE IT…. Yuck

I was a HUGE fan from the beginning, and I referred everyone I knew to listen, but I’m exiting now… too woke, too stupid and pandering! Ashley, I thought you were so intelligent but I see now how easily you are the unpopular gal who just wants to fit in. It’s so awkward! Yuck… I’m super grossed out by how you talk now. BYE

CRIME JUNKIE MAY HAVE SAVED ME

I LOVE crime junkie. Before, i oftentimes would get extremely bored when driving and would scroll through social media/TikTok. Obviously that is not safe and when speaking with a coworker she recommended I try podcasts and specifically, Crime Junkie. Needless to say I am now OBSESSED. It is my go to whenever I drive and always keeps me entertained/ satisfied. Thank you guys!!

Reviewed on Apple Podcasts
someone61540

Absolutely in love with this podcast. The hosts are a perfect combination. They tell the victims’ story in such a respectful and thoughtful way. Informative, entertaining and pure excellence.

I’m late to this podcast, but I love it!

This podcast is great, and I love there commentary on the different crimes. My Mom suggested it to me and I can’t stop listening to the episodes over and over agine. I would highly recommend this podcast to any people who love this kind of stories.

I used to be a huge fan and at one point was a patreon member. Just listened to the Mary Lynn Witherspoon episode and was honestly disgusted with the episode. The murderer, a biological man, stalked this poor woman, brutally murdered her and then attempted to assume the woman’s identity. Yet Ashley and Brit respect the murderer’s preferred pronouns and refuse to use his given name. Instead Ashley and Brit use “they/them” which makes the episode obviously confusing because that is ridiculous to begin with. They then go on to minimize the murderer taking and using Mary Lynn’s underwear, it was only bad that the murderer stole. Like, the man was a psychopathic maniac killer but Ashley and Brit are SO WOKE that they don’t want to offend his gender identity? And they explain this by saying that “we should be nice” (paraphrasing). Also, it was clear that the killer was not just trying to become a woman, but that he was trying to be Mary Lynn herself and was trying to impersonate Marylynn! As a result of this identity crisis, he literally MURDERED HER and then Ashley and Brit choose to respect his identity as Mary Lynn? I think the fame has gotten to Ashley and Britt’s head and they’ve forgotten the original mission of helping crime victims. Now they are wokies giving transgender murderers special treatment. I will not listen again and stop recommending.

You both have become part of my daily routine! Especially during long trips to my daughter’s archery competitions. You are also the first podcast to start my “love” for true crime!! Twitter @heatherdutton 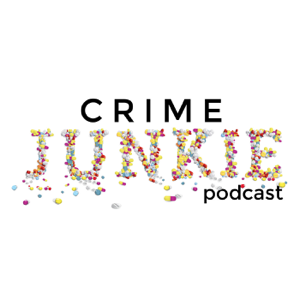 Crime Junkie is a weekly podcast dedicated to giving you a true crime fix. Every Monday, Ashley Flowers will tell you about whatever crime she’s been obsessing over that week in a way that sounds like you're sitting around talking crime with your best friends. The storytelling is straightforward and free of rabbit holes so the cases stay suspenseful and are easy to follow. If you can never get enough true crime... Congratulations, you’re a Crime Junkie! You’ve found your people.

Crime Junkie is a weekly podcast dedicated to giving you a true crime fix. Every Monday, Ashley Flowers will tell you about whatever crime she’s been obsessing over that week in a way that sounds like you're sitting around talking crime with your best friends. The storytelling is straightforward and free of rabbit holes so the cases stay suspenseful and are easy to follow. If you can never get enough true crime... Congratulations, you’re a Crime Junkie! You’ve found your people.