Used to be entertaining...

I stopped listening when it became all about therapy. It's just so boring now. In the earlier episodes she was a Pick Me girl, constantly putting down other women, and trying to impress the men.
But at least it was entertaining.

Let’s be honest, she’s not the funny one

My title is all I have to say. Great podcast.

Wow, I use to listen to this podcast when I was in college. Tried to listen to the most recent ones and I just can’t anymore. If you enjoy listening to loud noises, constant cussing, screaming, and hypocrisy then this show is definitely for you. So sad how she kicked her cohost/best friend off the show.

most of the comments made from both alex and sophia reek of internalised misogyny. female liberation is not making your bf happy with sex at your expense if you don’t like something you have every right to say that and receive what you want as your partner is. sexual empowerment isn’t being overly sexual it’s the freedom to do that if you want to but the way this podcast recommends that you have to do all this to please your man is honestly sad. even the title shows how deeply against women it is: call her “daddy” why must the title enforce that men are dominant in the relationship and sex and that the aim of women is to emulate. women are worth more than how good they are in bed it makes me sad to see them place value on it even if it’s unintentional.

Checked out this podcast to see what the hype was about. This host has amazing guests on her show but she has a hard time letting them talk and tell their story. I couldn’t make it through any interviews….they gave me anxiety and second hand embarrassment for the amount of times a guest was interrupted. I was just waiting for her to cut them off. It didn’t peak my interest and I probably won’t tune in again.

I wanted to like Call Her Daddy, but it’s so trashy.

The host of this show focuses every aspect of their “feminism” on what men perceive to be attractive. I found the “mental health” component to be insensitive and immature. Evidenced by the host making a joke about sexual abuse and asking intrusive and triggering questions about self-harm to a guest. The most concerning aspect of this podcast is it’s targeting of young impressionable women. As a previous long-time listener, in hindsight, I would not recommend this podcast to anyone. In my late teens this podcast personally led me to the lowest self-esteem of my life and into buying into the belief that a woman’s self-worth lies simply with her sexuality. Save your time and your mental health, skip this podcast.

Old Episodes are on Spotify

Anyone who still wants to listen to all Call her Daddy episodes, you can sign up for free on Spotify and listen from past to current. You’re welcome.

Pick me girl at it’s finest

“I eat hot Cheetos, hot dogs, and don’t workout.” Yet she photoshops her photos and sets unrealistic expectations for her young listeners.. Truly awful. She’s 27?! Rambling with loud noises and screams, horrible advice, made up stories. Yiiiikes. Oh and she jokes about rape and makes out with animals. Jesus fc.

This podcast is tragic. Alex is so obnoxious, screaming and making annoying noises for an hour straight isn’t funny or cute. The old episodes were fantastic. But still we all know that Sofia was, and still is the funny one! Hypocrite, fake and selfish

Sorry... i used to love this show when it was alex and sofia, i only listen to the old shows. Where did they go??

Am I missing something? Were all of the episodes with Sofia deleted or do old episodes drop after X amount of time? I was listening from the beginning and now I can’t find them all! 😩

Did you get rid of all the first episodes with sofia?

Man, I use to LOVE this show. Sofia and Alex were hilarious and silly and I would dream of a night out in NY with them. As previous reviews are saying, the show lost all of its comedy and magic. Alex is not funny on her own. I also find all the interviews boring, but that is the show now: boring. The episodes are now just Alex trying so hard, and you can hear it. Also, Laren is terrible. Why is she at all apart of this podcast? I am officially giving up on episode 100. I tried the Single Father era, but its just not worth it. Cash those Spotify checks Alex, before everyone else jumps ships to actual funny and engaging content.

Not worth the listen. Sometimes entertaining but mostly just someone who likes to hear themselves talk. Lots of hypocrisy too

pretty disappointed that we can’t listen to any of the old episodes anymore since it’s spotify exclusive :/ guess i’ll just continue listening to sofia with an f since she was always the funnier half of the duo anyways lol

Honestly these girls are just cringe now and I used to look up to them cause I thought they knew what they were talking about. In reality, they are just a bunch of unfunny girls who have no self respect and want to ruin the female race. 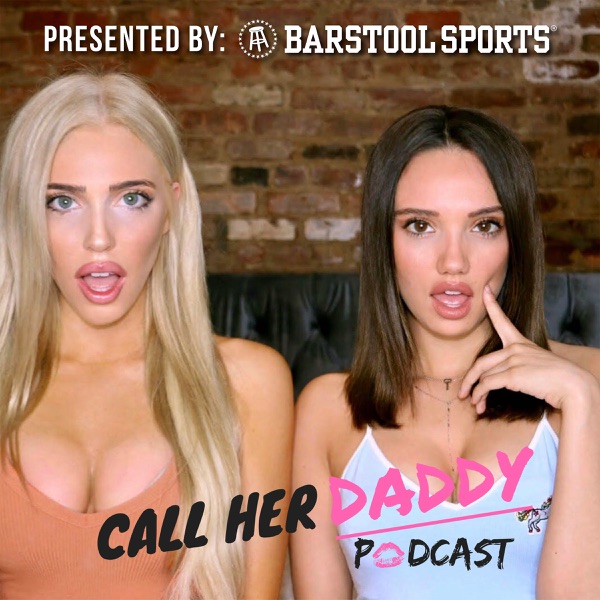 Follow along vlogger Alexandra Cooper and best friend Sofia Franklyn as the duo dives into the explicit details of their life in NYC. In their 20s, the two exploit the f*ck out of their lives, making you feel a hell of a lot better about yours. Relationships, sex, the NY social scene, embarrassing moments, and more are all addressed here on CALL HER DADDY.

Follow along vlogger Alexandra Cooper and best friend Sofia Franklyn as the duo dives into the explicit details of their life in NYC. In their 20s, the two exploit the f*ck out of their lives, making you feel a hell of a lot better about yours. Relationships, sex, the NY social scene, embarrassing moments, and more are all addressed here on CALL HER DADDY.